The new book The Race Card: From Gaming Technologies to Model Minorities examines how games have been used to establish and combat Asian American racial stereotypes. To learn more about this troubled history, we talked to author Tara Fickle about the role of games in racial hierarchies.

Tell us what your book is about in one sentence.

The Race Card argues that games have been instrumental in the development and entrenchment of racial hierarchies and have shaped egalitarian fictions about America as a “level playing field.”

Can you give us an example of a certain game’s influence on Asian racial stereotyping?

The book traces the long history of a social dynamic I call “ludo-Orientalism,” wherein American stereotypes about Asians develop around the way the latter play games, which is often characterized as “gaming” the system. In Chapter 1, I examine how Bret Harte’s poem “The Heathen Chinee” dramatized a “stacked” game of Euchre between a Chinese immigrant laborer and two Irish American workers to decry the rise of “cheap Chinese labor.” Euchre was widely considered “America’s national card game” in the late 1800s; although Harte’s poem was written as a satire of arguments to ban Chinese workers, the metaphor of the “cheap” playing, cheap working Chinese laborer was so powerful as to become a major rallying cry of support behind the 1882 Chinese Exclusion Act.

Chapter 6 tracks this same ludo-Orientalist dynamic into the digital age, where an online multiplayer game like World of Warcraft (WoW) became, in the first decade of the 21st century, a virtual battleground for Chinese Exclusion. The same racist rhetoric about Asians’ “unnatural” relation to gameplay was now deployed to oust century Chinese “gold farmers,”: workers in China, largely young men, employed to play WoW for hours on end to accrue virtual, in-game currency, which was in turn sold for “real” money to those wishing to accelerate the tedious leveling-up process. As in the 1880s, focus shifts from those purchasing in-game currency or developing the tedious “grind” mechanics of WoW toward Asian laborers who were ostensibly “ruining the game” by turning it into work. (Although, as anyone who has ever played games for any extended period of time knows, the line between “play” and “work” is nowhere near as clear cut as we would like to think. That false binary is another one I discuss at length in the book.)

What inspired you to study this topic?

I grew up playing a lot of games. Like many young women of the video game era, I fell off the gaming train at some point – nobody ever said so explicitly, but there was a sense that video games “weren’t for girls.”

But it wasn’t video games that led me to this book; it was Asian American literature. Some incredible professors I had in college piqued my interest. I was struck by how Asian North American narratives consistently framed immigration as a high-stakes game – one simultaneously strategic and chance-ridden – in which the prize was, ostensibly, the American Dream. This was completely at odds with the myth of the American Dream as the epitome of “fair competition” and “equal opportunity,” and I began to value those minority narratives for giving the lie to the notion that American success was due to hard work and the putative end of racism and structural inequality.

My own family’s immigration and assimilation experience concretized these issues. It made me realize that games–rhetorically and materially—were powerful precisely because they were so incredibly flexible. Games are used to justify racist rhetoric and legislation in the name of “fair play,” while simultaneously offering an avenue to “beat the odds.” My grandmother, for example, who fled Shanghai and later immigrated to the US from Hong Kong in the 1960s as a domestic servant, was never naturalized, in part because she was illiterate, having never been allowed to pursue her schooling in China. Gaming remained an alternate venue of social participation and identity for her as a “resident alien.” She couldn’t read or write, but she played, and she taught me to play: mahjongg, solitaire, poker, and especially – the lottery. Gaming was a form of survival for her, a way of controlling at least some small part of the world. And this, I found in my research, is a fundamental, but often overlooked, part of the model minority myth: the stereotype of Asian Americans not just as hard-working, but hard-playing, high-risk-taking gamblers who reinforce the American Dream through their serious play.

What were other surprising things you found in your research?

I’ve been struck by the role that Asia, and specifically the assumption of an absolute difference between East and West (“and never the twain shall meet,” as Kipling put it), played in the intellectual foundations of the field of game studies – but to an extent which is still hardly discussed. As Chapter 4 shows, game studies traces its history, and owes much intellectual debt, to the work of western and northern European scholars like Johan Huizinga and Roger Caillois, whose very definitions of why people play games in the first place were based in their presuppositions of fundamental differences between the games of different “civilizations” – particularly “Oriental” versus “Anglo-Saxon” – and their professional training and research interests as Orientalists.

That games are always political: not by chance, not only sometimes, but always – and that in part their power derives from the illusion that they are “magic circles,” somehow free from the social divisions and hierarchies that exist in “the real world.” My hope is that when people play or use the language of games they come to recognize the way that games are used to justify the unjust as instead equitable, rational, and inevitable.

For those teaching game studies or Asian American history, how best could they use your book and the research it provides?

The book provides students with the basic cornerstones of Asian American history from early waves of immigration through the Japanese American internment to the present, along with an updated way of thinking about the model minority in the digital, globalized age, particularly the age of East Asian economic and political power, and the resultant shift in U.S.-Asian diplomatic relations. For example, the ludo-Orientalist dynamic has become especially visible in the current moment of the Hong Kong protests, where U.S. game giants like Blizzard (creator of World of Warcraft and many others) faced domestic backlash after their decision to ban one of their professional esports players, “Blitzchung,” for publicly supporting the movement.

Understanding the Orientalist origins of game studies provides the necessary background to truly appreciate the central role Asia continues to play in contemporary gaming – not only as game players and spectators, but as exporters, manufacturers, and producers. It also helps students recognize how the power of games is itself indebted to the way that power relations tend to be drawn along lines of race, class, and nationality, alongside those of gender and sexuality more commonly critiqued in game studies.

How does the research you did for The Race Card lend itself to your next project if at all?

My next project is expanding on my interests in Asian American literature and culture to explore the publishing history and context of Aiiieeeee!, a seminal Asian American literary anthology. I’ve recently inherited the archive surrounding this anthology from one of the editors, Shawn Wong, and am in the process of developing a monograph and digital archive around it. You can learn more at Aiiieeeee.org. 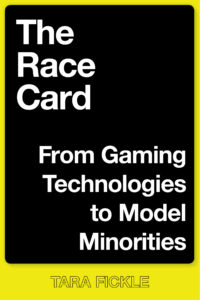 Tara Fickle is Assistant Professor of English at the University of Oregon and an affiliated faculty in Ethnic Studies, the Center for Asian and Pacific Studies, and the New Media & Culture certificate. She is the author of The Race Card: From Gaming Technologies to Model Minorities, now available from NYU Press. Find more ways to teach the book, and access copies of some of the primary materials and images examined, at tarafickle.com.