Excerpted from The Price of Paradise: The Costs of Inequality and a Vision for a More Equitable America by David Dante Troutt (NYU Press, 2014). 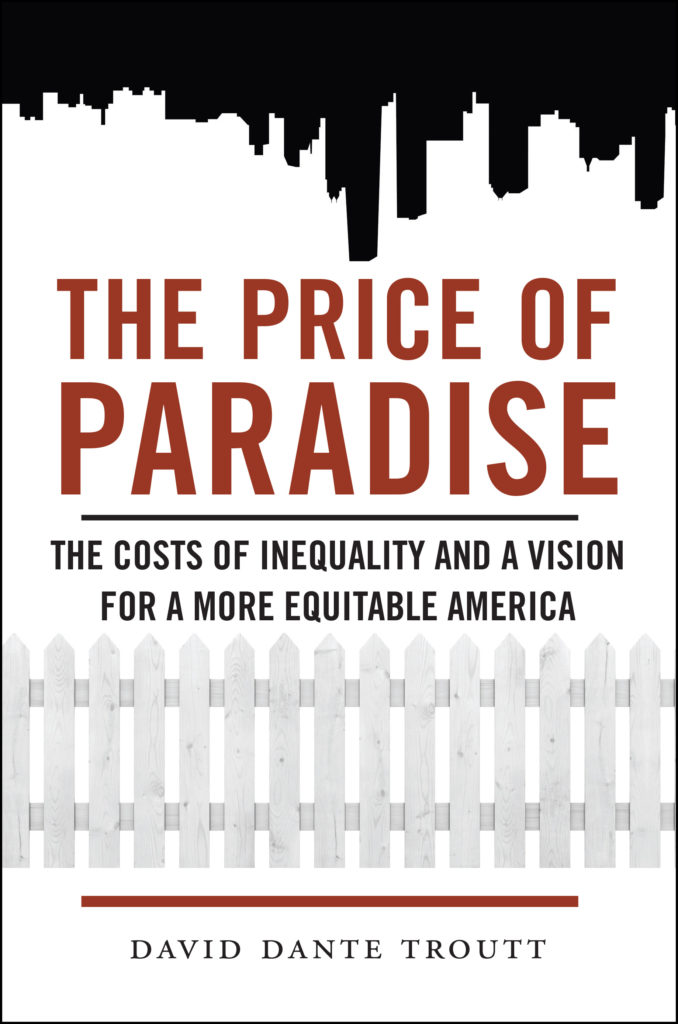 The impatience that characterizes discussions of race and racism in our so-called color-blind society has its roots in the momentous  legislative changes of the 1960s. The Civil Rights Acts of 1964, 1965, and 1968 reached into nearly every aspect of daily life—from segregated facilities to voting to housing—and represented a long overdue re-installation of the equality principle in our social compact. The question was what it would take—and from whom—to get to equality.

Was racial equality something that could be had without sacrifice? If not, then who would be forced to participate and who would be exempt? As implementation of the laws engendered a far-reaching bureaucracy of agencies, rules, and programs for everything from affirmative action hiring goals to federal contracting formula, the commitment was quickly tested. For a great many who already opposed the changes, patience was quickly exhausted. As welfare rolls rapidly increased, crime surged, and the real and perceived burdens of busing took their toll, many voters pointed to the apparent failure of a growing federal government to fix the problems it was essentially paid to cure. Among Democratic voters this made for unsteady alliances and vulnerable anxieties. People don’t live in policy and statistics as much as they do through anecdote and personal burdens. A riot here, a horrific crime there, a job loss or perhaps the fiery oratory of a public personality could tip a liberal-leaning person’s thinking toward more conservative conclusions—or at least fuel her impatience. Impatience would ossify into anger, turning everything into monetary costs, and making these costs the basis for political opposition to a liberal state. As it happened, this process moves the date of our supposed final triumph over racism from the mid-1960s to at least the mid-1980s. In the end, impatience won.

What I call impatience, others have characterized as a simmering voter ambivalence—even antagonism, in the case of working-class whites—to civil rights remedies, one that was susceptible to the peculiar backlash politics that elected both Ronald Reagan and George Herbert Walker Bush president. Language was central to this strategy, and the language that stuck was colorblindness. As Thomas Byrne Edsall and Mary Edsall wrote in “Chain Reaction: The Impact of Race, Rights, and Taxes on American Politics,” “In facing an electorate with sharply divided commitments on race—theoretically in favor of egalitarian principle but hostile to many forms of implementation—the use of a race-free political language proved crucial to building a broad-based, center-right coalition.” Ronald Reagan managed to communicate a message that embodied all the racial resentments around poverty programs, affirmative action, minority set-asides, busing, crime, and the Supreme Court without mentioning race, something his conservative forebears—Barry Goldwater, George Wallace, and Richard Nixon—could not quite do. The linchpin was “costs” and “values.” Whenever “racism” was raised, it became an issue of “reverse racism” against whites. The effect was the conversion of millions of once fiscally liberal, middle-class suburban Democrats to the Republican Party. Issues identified with race—the “costs of liberalism”—fractured the very base of the Democratic Party. In the 1980 presidential election, for example, 22 percent of Democrats voted Republican.

By 1984, when Ronald Reagan and George Bush beat Walter Mondale and Geraldine Ferraro in the presidential election, many white Democratic voters had come to read their own party’s messages through what Edsall calls a “racial filter.” In their minds, higher taxes were directly attributable to policies of a growing federal government; they were footing the bill for minority preference programs. If the public argument was cast as wasteful spending on people of weak values, the private discussions were explicitly racial. For instance, Edsall quotes polling studies of “Reagan Democrats” in Macomb County—the union friendly Detroit suburbs that won the battle to prevent cross-district school desegregation plans in 1973—that presents poignant evidence of voter anger: “These white Democratic defectors express a profound distaste for blacks, a sentiment that pervades almost everything they think about government and politics. . . . Blacks constitute the explanation for their [white defectors’] vulnerability and for almost everything that has gone wrong in their lives; not being black is what constitutes being middle class; not living with blacks is what makes a neighborhood a decent place to live. These sentiments have important implications for Democrats, as virtually all progressive symbols and themes have been redefined in racial and pejorative terms.”

By 1988, these same voters had endorsed tax revolts across the country and had become steadfast suburbanites, drawing clearer lines between a suburban good life and the crime and crack-infested city. Still they were angry, as magazine articles chronicled the rising political significance of what would be known as the “Angry White Male” voter. George Bush, down seventeen points in the presidential election polls during midsummer, overcame that deficit with TV ads about murderous black convicts raping white women while on furlough. That and a pledge never to raise taxes seemed to be enough to vanquish Bush’s liberal challenger, Michael Dukakis of Massachusetts. What’s important to recognize in this transition is how as recently as twenty years ago, Americans’ social lives were very much embroiled in racial controversy—despite the obfuscatory veneer of colorblind language to the contrary. Our politics followed. The election of Bill Clinton represented a distinct centrist turn among Democrats toward Republican language and themes and away from rights, the “liberal” label, and the federal safety net. The question we might ask about our current race relations is, only a couple of decades removed from this political history, what would compel us to assume that we are beyond the legacy of our racial conflicts?

The racial polarization that connected these political outcomes was deliberately fed by national Republican candidates in order to do more than roll back civil rights. It also served to install “supply-side economics,” a system of regressive tax-based reforms that contributed mightily to the costs of income inequality we currently face. That era—which arguably ended with the election of President Barack Obama—illustrates two points central to my examination of civic connectivity. The first is that the economic underside of racial polarization proved no more than the old okey doke. The second is that localism contains its own contradictions, which have come due in our time. Let me explain.

Only racism could achieve the ideological union of the Republican rich with the working man (and woman). Nothing else could fuse their naturally opposed interests. The essence of supply-side economics was its belief in the importance of liberating the affluent from tax and regulatory burdens, a faith not typically shared by lower-income households who might at best see benefits “trickle down” to them. In fact, they often paid more under tax-reform schemes of the 1980s.  Edsall provides data on the combined federal tax rate that include all taxes—income, Social Security, and so forth. Between 1980 and 1990, families in the bottom fifth of all earners saw their rates increase by 16.1 percent; it increased by 6 percent for those in the second-lowest fifth (the lower middle class); and it increased by 1.2 percent for those in the middle fifth (the middle middle class). But those in the second-highest fifth of all income earners saw a cut in their tax rate by 2.2 percent during that decade; and those in the top fifth got a 5.5 percent decrease in their rate. Overall, the richest 10 percent of American earners received a 7.3 percent decrease in their combined federal tax rate. The top 1 percent? A 14.4 percent cut during the 1980s. Clearly this hurt the middle class, as the vaunted trickle down never arrived. But it was working-class whites who bought the message that this model of fiscal conservatism, married to social conservatism in the form of a rollback of redistributive programs they perceived to favor blacks, would benefit them. It did not. Yet it established a popular political rhetoric by which lower-income whites can be counted on to take up against “liberal” policies that may actually serve their interests as long as opposition can be wrapped in the trappings of “traditional values,” “law and order,” “special interests,” “reverse racism,” and “smaller government.” This was pure okey doke based on an erroneous notion of zero-sum mutuality—that is, that whatever “the blacks” get hurts me.

Which also demonstrates the contradictions of localism. Remember my earlier argument that localism—or local control expressed formally through home rule grants, as it’s sometimes known—became the spatial successor to Jim Crow segregation. Through racially “neutral” land use and housing policy, it kept white communities white after the fall of legal segregation in the late 1950s and mid-1960s. Yet here’s the contradiction. While voters opposed to civil rights remedies and Great Society programs followed Republican leadership toward fiscal conservatism at the national level, they maintained their fiscal liberalism at the local level. The tax base they created for themselves through property taxes in suburbia could be contained and spent locally. Edsall describes the irony this way: “Suburbanization has permitted whites to satisfy liberal ideals revolving around activist government, while keeping to a minimum the number of blacks and the poor who share in government largess.” Of course, all of this worked best when “suburbs” meant middle-class white people and “cities” (or today’s “urban” areas) always signaled black and brown people. There was no mutuality of interests between the two kinds of places. It also worked when low property taxes—together with generous state aid—could reliably pay for great local public services like schools, libraries, and fire protection. It was a terrific deal. But that was then. Now, neither is true. The line between cities and suburbs has blurred into regions, and minorities and whites are busy crossing back and forth to work, live, and shop. Most of the fragmented municipalities that sprawled across suburbia are no longer able to sustain their own budgets, threatening the quality of their services, despite unimaginably high property taxes. The assumptions have not held.

Perhaps now we should consider the racially polarizing policies that became the norm under Reagan’s failed experiment. We tried them. Some believed fervently in them. But it is clear that they didn’t work and are not in our long-term national or local interest. There remains a legacy of racism, however, that continues to harm some of us disproportionately and all of us eventually. It’s to those three examples that I now turn.

Read the rest of this excerpt at Salon.com.