Republican political operative Roger Stone was sentenced to three years and four months in prison on Thursday by Judge Amy Berman Jackson after being convicted on perjury and witness tampering charges in December.

Weighing in on the case, President Donald J. Trump called out prosecutors for demanding a draconian sentence against Stone in a tweet, prompting four of the prosecutors to resign and Attorney General William Barr to state that he could not do his job properly because of the President’s attempt to influence the justice system.

While Trump’s actions represent an abuse of his office, the Stone case was heavily politicized from the beginning and hence a miscarriage of justice.

That Stone is a dirty political trickster and Nixon protégé who embodies the seamy side of American politics should not obscure his right to a fair trial and due process in the American system.

The charges against Stone centered on his alleged misleading the House Intelligence Committee in 2017 about his conversations with New York radio host Randy Credico and efforts to find out when Wikileaks would be releasing emails hacked from the Democratic Party which portrayed Hillary Clinton in a negative light.

Stone’s defense team played a 50-minute clip of his intelligence committee testimony for the jury, claiming the prosecution did not prove its case, and said that Stone did not know about Wikileaks hacked emails ahead of time.

Believing that all politics is “performance art,” Stone’s strategy was to make the trial resemble a circus. His team characteristically placed a twenty-foot rat at the front of the courthouse after emails captured Stone calling Credico, a “stoolie” and “rat.” (Stone had asked Credico to “do a Frank Pentangeli” – a character in the Godfather film who lied to protect the Corleone family).

As an old Nixonite, Stone was trying to recreate the atmosphere of the famous “Chicago eight” trial of Abbie Hoffman and other hippie activists who were accused of inciting a riot outside the 1968 Democratic Party convention as part of a protest against the Vietnam War.

Hoffman and his associates used dry humor to mock the judge (Julius Hoffman) and expose the trial as a political show trial in order to win over public opinion.

Stone was less successful than Hoffman as interest in his trial was limited and public opinion largely arrayed against him and Trump.

While misleading Congress is never warranted, the fact of the matter is that the substance of the charges against Stone are all about nothing and his case more than anything reflects on the distorted political culture of the Russia Gate era.

The main defendant is caught bragging about certain insider knowledge he does not appear to possess, while the zealous government prosecutors are pushing for a perjury conviction and long prison sentence in an attempt to pressure the defendant into implicating his associates and to validate their own failed investigation.

The Mueller inquiry, however, never revealed that Trump colluded with Russia and Wikileaks or was involved in any significant malfeasance for him to require Stone to cover it up.

The big loser in all this ultimately is not only Stone, but also the integrity of the federal judicial system and concept of the separation of powers which has been dealt another devastating blow. 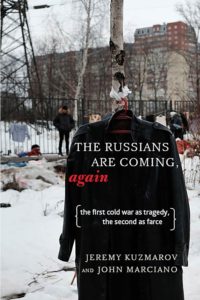 Jeremy Kuzmarov is author of The Russians are Coming, Again: The First Cold War as Tragedy, the Second as Farce, with John Marciano (Monthly Review Press, 2018) and Obama’s Unending Wars: Fronting the Foreign Policy of the Permanent Warfare State (Clarity Press, 2019).