[This article originally appeared at the Chronicle of Higher Education.] 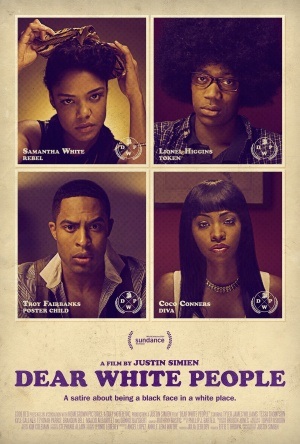 Rarely is a white audience afforded a lucid and freewheeling response to the deluge of indignities blacks still endure. Instead, reaction to the barrage of stereotypes embodied in many Tyler Perry films, the one-dimensional depiction of blacks in news or reality television, or whites’ insulting appropriation and commodification of a hard-earned black urban culture, is seldom considered.

Now Dear White People, appropriately set on an elite and predominantly white university campus, delivers a timely and barely satiric lesson on why, for many blacks, tensions continue to simmer beneath the nation’s facade of racial harmony and transcendence. The film’s writer-director, Justin Simien, lays out an ambitious lesson plan to reveal how racial stereotypes play out on an elite campus that claims to celebrate diversity.

Inclusion in such settings typically means a small number of blacks fitting into preconceived notions of who and what they are. And for many, the stereotype of black life—of a monolithic, urban slang-wielding group that glorifies criminality and crass consumerism—is more salient than the reality of black individuality.

So many conflate blackness with an underachieving urban underclass that, for some white filmgoers, it’ll come as a surprise that blacks don’t wish to be viewed as products of street culture. Nor do they relish the curiosity of whites who touch their hair or inquire about its texture, manageability, or authenticity. The individuality and dignity readily accorded whites are often denied blacks, so few African-Americans manage to escape some of the slights deftly depicted on screen.

Even at elite colleges, many high-achieving African-Americans are often addressed by their white peers as if aliens from a rap video, rather than as fellow classmates from similar or even more-privileged backgrounds. Why white students feel entitled to use the N-word, or to affect urban slang when greeting their black classmates, is both confounding and yet all too familiar.

One character in Dear White People, a prototypical nerd and gay writer, is assumed to be a member of the Black Student Union and to live in black housing when in reality he feels as alienated by many blacks as he does by the larger culture. A girl from the South Side of Chicago is so determined to fit in that she conforms to a narrowly prescribed, self-deprecating role; while the main character, Sam White, is the agitator whose provocative campus radio show, Dear White People, not only catalogs the daily slights but lashes back. In one show she mockingly counsels: “Dear White People, don’t dance.” But behind the scowl is the pain and frustration of a sensitive aspiring filmmaker who privately favors the Swedish film director Ingmar Bergman over Spike Lee.

While Sam speaks for the black students, she is understood best by her perceptive white boyfriend. He alone among the characters sees and fully appreciates the person beneath the skin. It is here where we are granted a close-up look at the intricate dance that is race, the complicated series of endlessly variable calculations that defy neat categories or lazy shorthand. It’s all covered, sometimes tumbling all at once from the screen with such velocity that one may at times miss the subtlety.

What becomes clear is that the central black characters are anything but the interchangeable cartoon cutouts they are in the imaginations of their white—and sometimes their black—peers. The cost of acceptance in predominantly white settings is often great, as is the temptation to insist that America has come so far on the racial front that whites can be considered the new victims of discrimination who can mindlessly evoke black stereotypes for fun.

In the end it’s not their race that unites these highly individual black students at the proverbial cafeteria table, but rather the barrage of indignities that effectively obliterates their differences. It’s the persisting erasure—the inability to see them as unique individuals—that cuts so deeply.

Recognition or even denial may account for some of the uneasy laughter I heard in the Upper West Side theater where I was among an age- and racially-diverse New York audience. Not all will agree that the filmmaker’s incisive critique is justified, but this film is certain to be discussed, on campuses and elsewhere, for many weeks and years to come.

Pamela Newkirk is Professor of Journalism at New York University. She is the author of Within the Veil: Black Journalists, White Media (NYU Press, 2012).