, offers a look at the particular type of racism on the rise with Judge Sonia Sotomayor, President Obama’s nominee for the Supreme Court. 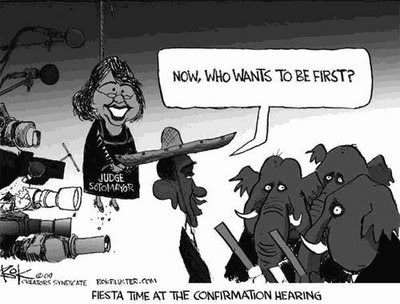 Writing in the New York Times Frank Rich observed not too long that “Gay people… aren’t the surefire scapegoats they once were. Hence the rise of a jucier target: Hispanics. They are the new gays, the foremost political piñata.” Rich’s observation took on literalist meaning this week when Creators Syndicate’s Chip Bok depicted Supreme Court nominee Sonia Sotomayor hanging from a rope and strung up like a piñata along with a Mariachi sombrero-wearing President Obama handing out bats to Republican Congressmen.

Recall, for example, how the “lynching” that Supreme Court Justice Clarence Thomas said he indignantly “suffered” when Anita Hill accused him of sexual harassment during his confirmation hearings years ago drew ire for obvious though ironic reasons. After all, the conservative Thomas, who wouldn’t have been able to marry his Anglo American wife in the state of Virginia, where he lived, until Loving vs. Virginia (1968) made it legal for Blacks to marry whites, used the proverbial race card when all through his career he had eschewed the “racisim” inherent to affirmative action policies that, for him, discriminated against whites. So suddenly, from his race-free worldview, he was being lynched by, not inconsequentially, a black woman.

Fast-forward to our present and now Sotomayor, of Puerto Rican descent, and hanging, ahem, presumably from a tree, is a stand-in for all Latinos in the U.S. as a recent cover of Time Magazine suggested. Puerto Ricans, who are U.S. citizens by birth, are somehow like Mariachi-sombrero wearing and presumably piñata loving Mexicans in the public imagination though the they are routinely discriminated against with a fervor and hate that makes politicians spend billions on paper-walls to keep “them” out though they’ve been “in” the U.S. for longer than current political and historical memory can account for. Political piñatas indeed. And thus the problem with representative personhood for “Latinos” as it is understood in the public imagination.

Political enfranchisement through appeals to pan-Latinidad leaves an empty space where our old political selves use to be. And, what’s more, it leaves too many Latino stripes missing in action. Central Americans, Brazilians, all sorts of homies form the Global South in the U.S. run the risk of being read the same way in the public sphere; not to mention the history that is evacuated every time “Latinos” are seen merely as a recent intrusion onto the national fold. “See,” the media implores, “if she can do it, so can you.” A reverse salvo of the “¡Sí se puede!” that so many of us have been fighting for so long runs the risk of leaving us unable to make clear why an appeal for political enfranchisement under the rubric of a collective identity (“Latinos” writ large) binds us to a history of representative personhood incapable of addressing how our differences, and contributions, need to be made intelligible in the public sphere. The prospect of having to do so on the horizon might require our losing Sonia Sotomayor. Not the person, of course, or the judiciary record she brings that must be as scrutinized as that of any other nominee (especially as it relates to abortion freedoms for all women), but the belief in the benevolence of the state to embrace us as the “Latinos” the state thinks we are.

Refusing such a gesture, the belief that we’re in an inclusive U.S., on a level playing field and alike in some fundamental way—like the belief in benevolence of the state—allows us to awaken from the elusive embrace of a national fantasy incapable of reciprocating our possibilities for self-making and the deep historical accounting required in order to make it so. Such are the limits and responsibilities of becoming political subjects, forsaking representative personhood, in order to awaken from the elusive, albeit seductive, dream of inclusion.

Reposted from The Latino Body Blog.

One thought on “The Space Behind Sonia Sotomayor”