Over the last few years, we have seen an unprecedented surge in teacher activism, most dramatically in the 2018 “Red State” walk outs in West Virginia, Oklahoma, and Arizona protesting low pay and in adequate health benefits and demanding increased funding for public education. Subsequent strikes and walkouts throughout the country – especially in Los Angeles, Oakland, and Chicago – have been more than about traditional union demands around compensation as educators are increasingly fighting for “the schools our students deserve,” including lower class size, more counselors, nurses and librarians, and “community schools” that offer wrap-around services and more parent engagement as an alternative to privately-run charter schools that drain resources from public schools. The Chicago teachers’ union in its strike even demanded housing for homeless people, pointing to the link between homelessness and student performance.

All of these mass mobilizations have forced otherwise fiscally and otherwise conservative elected officials on the local and state levels to make unprecedented concessions to educators. In doing so, they have changed the national conversation about the essential role of educators and of public education in preparing young people for a future in our economically and politically crisis-ridden nation.

Yet, despite the attention these struggles have received and the righteous demands that they have advanced, they have not yet been able to fully address the instructional and curricular questions that implicitly confront students and teachers every day in the classroom: what is the purpose of public education and how should that purpose be reflected in the working relationships between students and teachers? Without answering those questions, are we just fighting to add resources to a flawed, possibly authoritarian project that prepares most students for mindless repetition in school and later at work, or are we fighting for something truly transformational? And if it’s the latter, how do we do that?

In Educational Justice: Teaching and Organizing against the Corporate Juggernaut, Howard Ryan assembles a series of chapters (full disclosure: I wrote one of them) that begin to address these questions by exploring the intersection between the corporate education “reform” agenda, how it manifests itself inside the classroom, and the various ways in which educators, parents, and students have organized – in their schools and unions – to resist that agenda and fight for instructional and curriculum alternatives.

In doing so, the book doesn’t pretend to have all the answers, but does strongly suggest through the case studies it presents and the broader analysis it provides that educators and their allies will be unable to successfully combat corporate “reform” classroom by individual classroom. This is because the system of public education is indirectly, but ultimately, controlled by the corporate elites whose agenda is not about developing critical thinking, engaged students, especially in working class communities and communities of color.

Consequently, what distinguishes this book from other books on unions and public education is its focus on the fight for instructional quality as a key focal point in the fight for public school transformation.  In doing so, the book offers ways that educator unions, even those local unions already fighting the broader fight for social and racial justice, could begin to integrate a vision for curriculum and instruction into that fight along with a plan to involve rank and file educators in the development of that vision.

For that reason, Educational Justice should be essential reading for social justice educators not involved in union activity who are frustrated by the slow pace of instructional change and the institutional obstacles they face (e.g. over-testing, mandated curriculum, etc.). It is also offers something of a roadmap for teacher union activists and leaders seeking to engage social justice educators in the struggle for a truly liberatory whole-child agenda that combines the need for progressive pedagogical “reform” with the fight for needed resources. 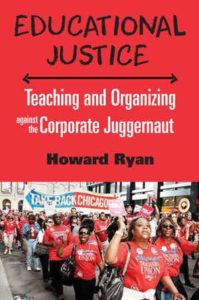 Joel Jordan is a retired high school teacher and former Director of Special Projects for United Teachers Los Angeles. He is currently a coordinator for the California Alliance for Community Schools, a coalition of urban educator unions fighting for increased school funding and against school privatization. His essay “How to Fight Back: Teacher Unions Against the Corporate Juggernaut” is featured in the book Educational Justice: Teaching and Organizing Against the Corporate Juggernaut, available from Monthly Review Press.

Feature image from Fibonacci Blue on Flickr used under CC BY 2.0