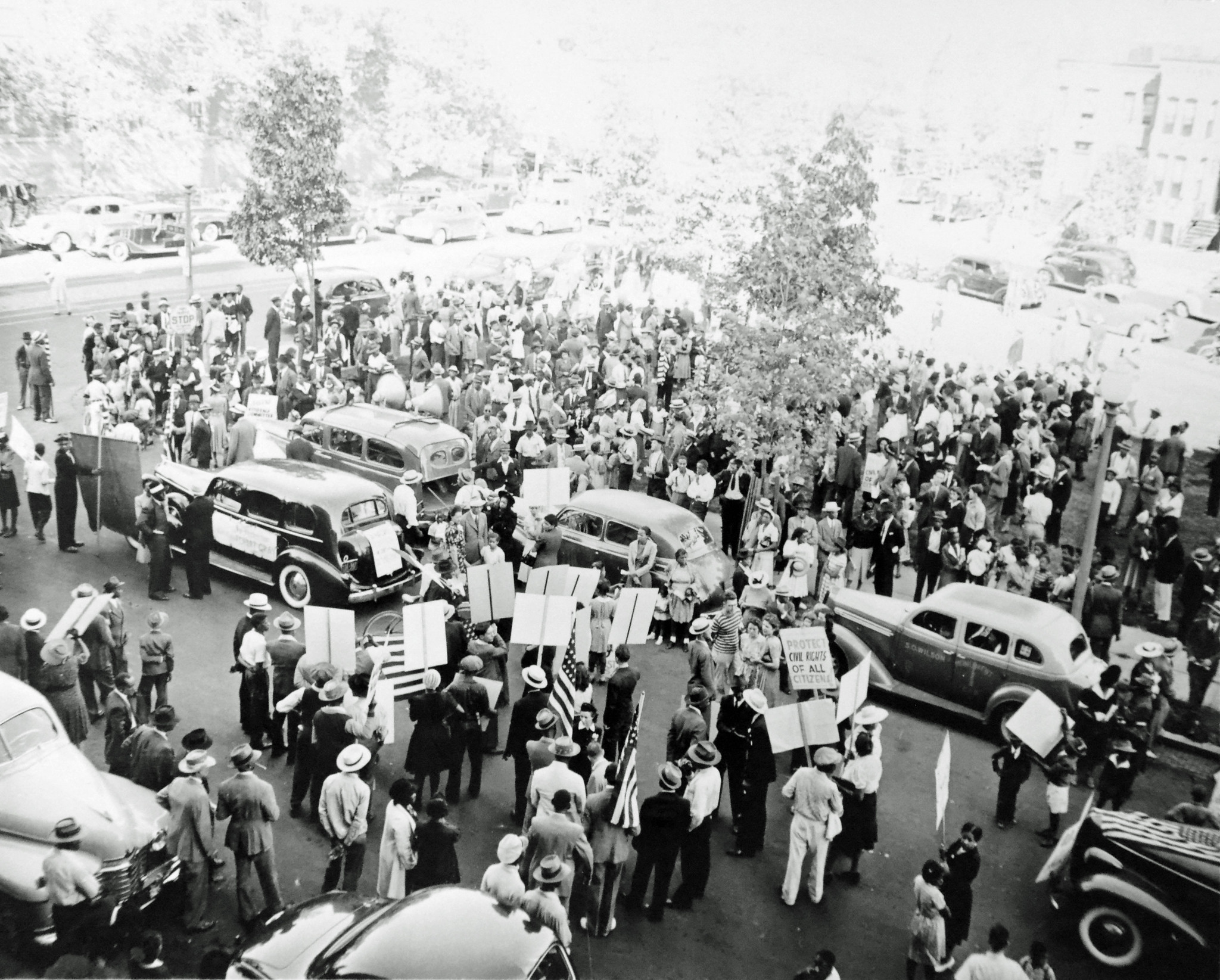 In the last month we have seen uprisings across the country and the globe in response to the murders of George Floyd, Breonna Taylor, and Ahmaud Arbery. And more recently, thousands gathered at Grand Army Plaza in Brooklyn, New York to honor Black transgender lives lost to violence. Gesturing back to the 1917 NAACP-sponsored silent march against lynching, predominantly young people, dressed in white and waving flags from Caribbean countries, made their way through downtown Brooklyn. From an earlier June protest, a video of first grade New Yorker Wynta-Amor Rogers passionately marching and chanting “no justice, no peace” has since gone viral. Young Black people’s engagement in campaigns against anti-Black violence has a long history, even well beyond what many conventionally understand to be the civil rights movement.

Young Black people have had their share of traumatizing and deadly encounters with police both inside and out of schools. Earlier this year, six-year-old Kaia Rolle cried and pleaded with the Orlando police officers who ziptied her hands as she was led out of her elementary school. Last year, a sheriff’s deputy in Broward County attacked a 15-year-old student, slamming her to the ground in her classroom. Aiyana Stanley-Jones was seven when she was killed in 2010 by Detroit police who raided her home while she slept. Cleveland police killed twelve-year-old Tamir Rice in 2014 as he played in a local park. Michael Brown was eighteen when the Ferguson police gunned him down in the street. These young Black people were not safe from police violence because of their youth. No matter where they were, they were at risk. It’s no surprise, then, that young people would see themselves as an integral part in a resistance movement against anti-Black violence.

Young Black people’s risk of police harm and murder, and the relationship to the ways in which Black young people are and have been both adultified and criminalized have a long history. In the Depression era, social scientists, reformers, media, and the police considered all poor and working class young people at risk for juvenile delinquency. But young Black people had the added factor of blackness that imposed upon them an essentialized criminality. For young Black people in Washington, DC, this was compounded by the violence of racial segregation. Coming of Age in Jim Crow DC: Navigating the Politics of Everyday Life centers both the vulnerabilities of young Black people, and the ways that they were (and are) thinkers and theorists, adeptly aware of the very dangerous and contradicting circumstances in which they lived, and how they acted to refuse these imposed conditions.

Even though the field of childhood science was professionalizing and expanding in the early twentieth century, neither social reformers nor a burgeoning group of criminal justice professionals afforded Black young people the same innocence of childhood that protected white preteens and teens. For Washington DC’s Black teenagers, the incongruity of living in the nation’s capital, which was both the seat of democracy and a Jim Crow, racially segregated and hostile city, was clear to them. In the over 200 interviews conducted by Howard University sociologist E. Franklin Frazier, many of the young Black Washingtonians not only recount their frightening interactions with DC police, but also their strategies and interventions for dealing with this danger.

Susie Morgan was fourteen-years-old when she was interviewed at the Southwest Settlement House in 1938. Susie recounted two stories highlighting her interactions with DC police. One involved swimming in the Lincoln Memorial Reflecting pool. With only one public swimming pool in DC for Black people, the reflecting pool and the Union Station Columbus fountain were two places to cool off during DC’s hot summers. While young white people could be found frolicking and sailing boats in the reflecting pool, Susie described being threatened with violence and chased out by police officers when she and her friends attempted to swim there. Similarly, despite a regular practice of white people throwing money at Black children down near the Southwest wharves, encouraging the children to perform variations on minstrelsy, police surveilled and punished the young people who participated. Susie described one afternoon on her way back from earning a quarter when a cop chased and beat her all the way home.  Susie noted that it was fortuitous that the officer had used only his “hand” and “a switch” and not his club, which she knew could have been fatal. When they reached her two-room home in Clarks Court Alley, the officer berated Susie’s mother, insisting that she whip Susie.

In both of Susie’s answers, the regularity of these kinds of harrowing interactions with the cops comes through. In her retelling of her and her friends’ experiences at the reflecting pool, Susie narrates the ways they mock the cop as he tries to get them out of the pool with threats of violence. They also evade him when he leaves to get more officers to help him remove the five or six of them playing. They respond to the police threats on their bodies and lives by underscoring that Abraham Lincoln, presiding on one side of the reflecting pool, has given them express permission, as Black children, to be in his pool, even, at one point, ventriloquizing Lincoln. In her interaction with the cop who chased and beat her, Susie is aware of the danger and the possibility of worse violence – violence that could have resulted in her death. She also describes her mother’s response, who assured the cop that she would not only beat Susie, but that she would “half kill” her. When the officer left, seemingly satisfied with that answer, Susie’s mother dismissed him with a wave and proceeded to joke with her daughter about the quarter she had earned at the wharves. Susie said, “she did not beat me.” Fourteen-year-old Susie is able to not only tell the story, but to also identify for her interviewer the intricacies of her reclamation of spaces and the political theater that she and her friends, and then her mother, engaged in, to resist and refuse the different manifestations of state-sanctioned racial segregation and terror in the Capital City.

In the early twentieth century, in both northern and Midwestern urban spaces, young Black people were assumed to be “juvenile delinquents” and suffered higher rates of arrest. Using the same environmental models in which sociologists were trained, police believed Black children were prone to criminality. Despite these representations, Coming of Age in Jim Crow DC foregrounds young Black people’s voices, drawing attention to their introspection and to Black youth epistemologies. These young people were masterfully aware of the geopolitical and social realities of their lives under the confines of regimes of white supremacy. They claimed their subjectivities and acted against these restrictions politically and spatially. In the summer of 1938, during the protest against two decades of police brutality in the District, newspaper images show the large number of Black children in the procession, flanking the car carrying the widow of the latest victim of DC’s Metropolitan Police Department’s “thugs in uniform.”

Young Black people were politicized by their quotidian experiences with and their understanding of the ubiquity of anti-Black police violence and the racial geographies of their city. Then like now, they were not protected from the state-sanctioned violence Black adults experienced. And then like now, they joined protests, resisted the racist geographies of containment, and engaged in organizing to develop community strategies to mitigate and intervene in the violence and harm caused not only by the police but also by economic discrimination, housing and food insecurity, and educational and health care inequities. 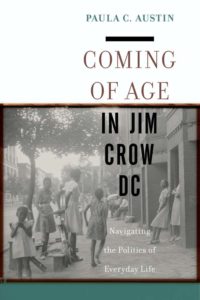 Paula C. Austin is Assistant Professor of History and African American Studies at Boston University. She writes and teaches about Black visual culture, African American and civil rights history, and facilitates faculty professional development on diversity, equity, and inclusion. She is the author of Coming of Age in Jim Crow DC: Navigating the Politics of Everyday Life, available from NYU Press.