On March 3 the U.S. government formally charged Honduran citizen Geovanny Daniel Fuentes Ramírez “with conspiring to import cocaine into the United States and related weapons offenses involving the use and possession of machine guns and destructive devices.” Federal agents had arrested Fuentes Ramírez two days earlier at Miami International Airport; the charges were filed in the Southern District of New York.

While the case didn’t get much media attention in the United States, it provides a fascinating insight into the connections between our government’s foreign policy, its approach to asylum, and its “war on drugs.”

The case links the current president of Honduras, the National Party’s Juan Orlando Hernández, to a major drug trafficking operation. According to U.S. prosecutors, in or about 2013 Fuentes Ramírez paid Hernández some $25,000 “in exchange for protection from further interventions by law enforcement” against his drug trafficking business. Hernández, who began his first term in 2014, also “agreed to facilitate the use of Honduran armed forces personnel as security” for Fuentes Ramírez’s operations, according to the charges, and he instructed the alleged drug smuggler “to report directly” to Tony Hernández, the future president’s brother, “for subsequent drug trafficking activities.”

The “End of Asylum”

President Hernández denies any connection to drug trafficking, but the evidence against him keeps piling up.

One of the bribes Tony Hernández forwarded was allegedly some $1 million that notorious Sinaloa Cartel boss Joaquín Guzmán Loera (“El Chapo”) earmarked for the current president during the 2013 elections.

The U.S. Department of Justice clearly agrees with the assessment of many Hondurans that their country has become a “narco-state.” So we might expect a strong condemnation of President Hernández from the U.S. government, which has spent billions of dollars over the past fifty years fighting drug trafficking in Latin America. And surely the U.S. asylum system would give special attention to the thousands of Hondurans who in recent years have fled from drug gangs that the U.S. government says operate under protection from Honduran armed forces personnel.

The Trump administration’s reaction has been exactly the opposite.

The present U.S. government seems to have no problems with the Honduran president and his apparent drug connections. In fact, just one day after Hernández’s brother was convicted in New York, U.S. interim ambassador to Honduras Colleen Hoey was photographed laughing with President Hernández himself.

As for Hondurans seeking asylum, the Trump White House has slammed the door in their faces: current immigration policies add up to what several analysts have declared “the end of asylum.” An important element in this is a safe third country agreement Honduras made with the United States last September. Far from accepting people fleeing Honduras’s drug gangs, the United States is now sending the refugees to nearby Guatemala—and plans to ship asylum seekers from other countries into danger in Honduras.

The Trump administration gets a lot of criticism from many quarters, but we haven’t heard a lot about these particular outrages. There’s a reason: U.S. support for rightwing Central American governments is a longstanding bipartisan policy, one which doesn’t get much pushback from the corporate media.

In the case of Honduras, the Obama administration gave de facto support to a June 2009 coup against elected president Manuel Zelaya and then allowed the new coup-installed government to hold a highly suspect presidential election that November—the first of the three elections Tony Hernández was accused of trying to influence with drug money. Following Obama’s example, in December 2017 the Trump administration certified the even more questionable election of President Hernández to an unconstitutional second term. Establishment media like the New York Times and the Washington Post largely ignored or downplayed these developments.

This should be a reminder that simply removing Donald Trump from office won’t end human rights violations in the U.S. immigration system. Trump’s immigration policies are definitely worse than earlier policies, but that doesn’t mean the earlier policies weren’t bad. Truly effective immigration reform is going to be impossible without fundamental changes in this country’s foreign policies. 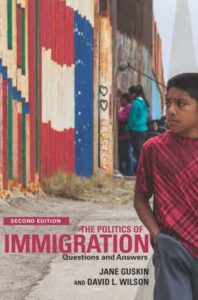 David Wilson has been writing about immigration, labor, Latin America and Caribbean since 1990. He is the co-author of The Politics of Immigration: Questions and Answers, published by Monthly Review Press.

Feature image from Casa Presidencial: US acting ambassador Colleen Hoey meeting with President Hernandez the day after his brother’s conviction in New York.