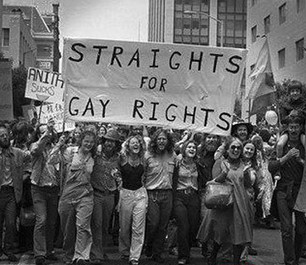 It’s Pride Month, a time for celebrating the differences that make up LGBTQ communities. Queer celebration and pride are of course important acts and feelings to embrace in a heteronormative society. However, by celebrating only queer people, we sideline the ways straight people support us and are often-honorary members of our communities. Even more than that, we are letting our straight friends and allies off the hook. They could be doing more.

While being against homophobia is the most obvious way for straight allies to promote sexual equality, another immensely powerful practice is for straight individuals to give up their straight privilege. Giving up straight privilege, even some of the time, I think would elevate the status of LGBTQ sexualities and lessen the social hierarchy that privileges heterosexuality over homosexuality in our culture.

For me, it’s important to separate out homophobia from heterosexual privilege.  Homophobia is the range of prejudicial attitudes and discriminatory acts that stigmatize, subordinate, and exclude queer people from respect, equality, and social goods such as jobs, homes, and services.

Straight privilege, in contrast, is about the unearned advantages that come from being or claiming a straight identity. Straight privilege is, then, a benefit every straight person accrues just by being straight. To be clear, I am not arguing for straight people to become gay or queer. But I am arguing that straight people should let themselves be seen as gay or as not clearly straight more often in their everyday lives. Everyday acts of surrendering straight privilege would counter the sexual stigma that persists in defining LGBTQ sexualities and it would promote a more queer-friendly society.

Straight privilege, for example, is claimed and performed in everyday life when straight individuals simply disclose their heterosexuality to disassociate themselves from homosexuality. In my book Straights: Heterosexuality in Post-Closeted Culture, I found that many of the straight men I interviewed who supported LGBTQ rights still felt uncomfortable being alone at a Pride parade event or in socializing in a gay bar without a female companion, be it their female friend, girlfriend, or wife. These straight guys would bring their girlfriends or wives to Pride events and other gay spaces to signal their straightness. If by chance their girlfriends or wives weren’t available, they would mention them in conversation to indicate their straight identity.

Similarly, many of the straight women I talked to would also bring up their boyfriends or husbands when they were worried about being perceived as lesbians, but they expressed more comfort socializing in gay spaces without their male friends, boyfriends, or husbands present. In part straight women’s comfort came from the fact that the gay bars and clubs they went to were patronized by mostly gay men, not lesbian women.

However, the most queer-friendly straight men and women I talked to said and did a number of things to lessen LGBTQ stigma and promote sexual equality. These straights used inclusive terms like “partner” instead of “wife” or “husband” to refer to their significant others. They also didn’t defensively disclose their straight identity when a same-sex person flirted with them. Of course, they didn’t try to lead people on, but they also didn’t make known their heterosexuality or bring up their wife or husband to avoid being thought of as possibly lesbian or gay.

And so for Pride Month and, really, every month, I challenge straight allies to refuse the unearned advantages that adhere to being part of the dominant sexual group and to enact a small measure of change through resisting the identity politics of straight privilege in their everyday lives.

James Joseph Dean is Associate Professor of Sociology at Sonoma State University and author of Straights: Heterosexuality in Post-Closeted Culture (forthcoming in August 2014 from NYU Press).