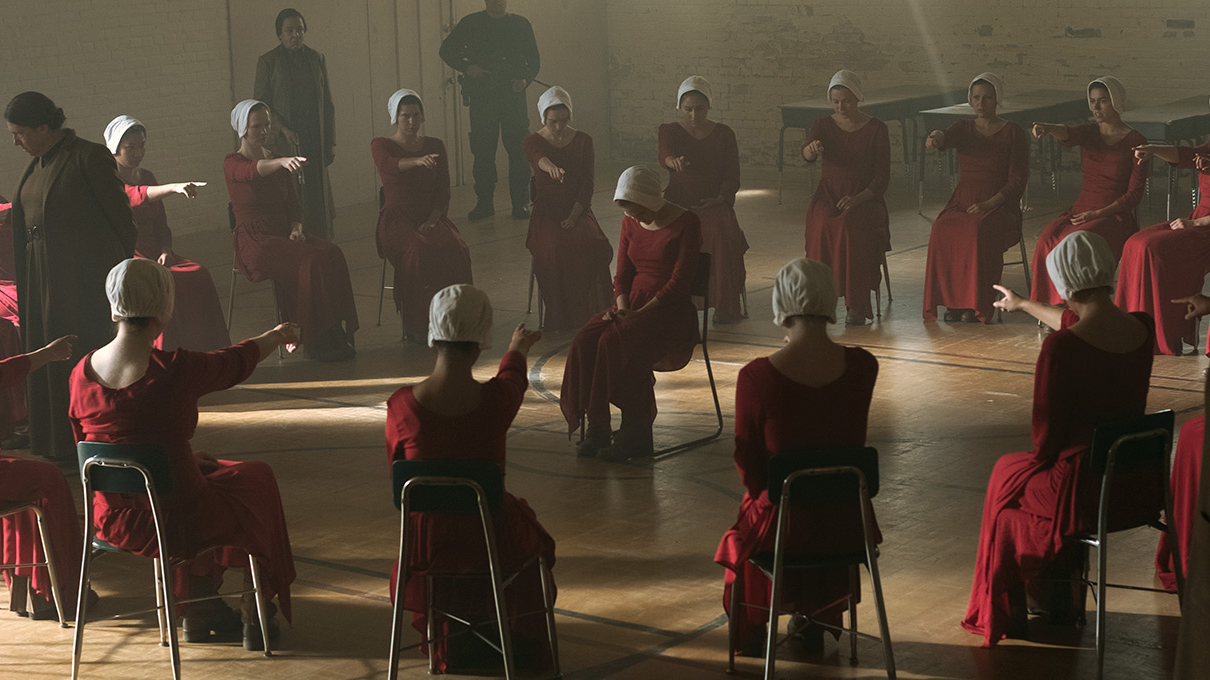 Hulu’s much-acclaimed TV-adaption of Margaret Atwood’s dystopian novel, Handmaid’s Tale, has left many viewers contemplating if the United States (and many other democracies) are on the path to authoritarian, anti-woman futures. Groups of women all over the United States are dressing in red robes and white bonnets to protest bills directly targeting women’s reproductive health and justice. Just 6 months ago, many Americans thought we’d have our first woman president. But now women are marching en masse and engaging the symbolic politics of silent submissive handmaids in the face of a movement to curb women’s rights. While the United States is not experiencing the steep-declining birth rate as in the show, the same underlying logic of needing to control women’s reproduction is still front and center in today’s politics. The show captures June’s (Offred) and Moira’s disbelief at the methodical rollback of their rights, as they contemplate ‘how can this happen here?’ Similarly, many Americans wonder, how did we get here? Despite all our ‘progress’ in women’s rights and gender equality, these same rights are still up for debate and in danger of vanishing.

This tension between progress and regress is not just happening here, it is actually global in scale. First, the good news. There are more women in governments all across the globe now than ever before. In 1995 the global average of women in parliaments was about 10%, and that has more than doubled to 22% today. Most countries today have eliminated discriminatory polices restricting women’s access to employment, credit, and property. And today 95% of countries have criminalized at least some types of violence against women. Gilead of Handmaid’s Tale would seem unlikely in a world or country that promotes women in government and the economy and protects them from violence, right?

But despite all this ‘progress,’ women are still vastly outnumbered in most governments in the world (only Rwanda and Bolivia have over 50% women in Parliament). Women also make less money everywhere in the world and are more likely to be poor. Also, according to the World Health Organization, 1 in 3 women worldwide will experience partner violence in her lifetime. In Chechnya gay men are being rounded up and tortured. Maybe Gilead is more real than it isn’t.

How can one reconcile this feminist progress on a global scale that just does not seem to generate as much change as we’d hoped? How do we go from thinking we are in the midst of finally achieving gender equality to believing we are facing a Gileadian future? Part of the problem is thinking that adding women to governments and economies, and creating laws punishing violence directed at women, is actually gender equality. While such efforts are necessary and important, they do not necessarily destabilize the sexist beliefs and institutions that oppress women (and many other marginalized groups) in the first place.

There are several reasons promoting women is not enough for gender equality, but ultimately it is because gender still matters. By gender, I mean the socially constructed masculine and feminine scripts assigned to sexed bodies. Unfortunately, a key reason the promotion of gender equality is not having a greater impact is because gender cannot be just about women. Men also have gender, but masculinities are often left out of efforts to make the sexes more equal. For example, the prevailing logic of why it is important to have more women in government is because they will behave differently—as in better represent women. But why then are men so poorly representing 50% of the population? This conversation gets missed when gender equality is all about women.

My one major critique of the series is how it obscured white supremacy, which played a central role to the novel, and should ultimately be a central focus of emancipatory gender equality. In the novel, Gilead is a white supremacist nation, handmaids are only white, and people of color are banished to “homelands.” The future of Gilead is white, despite declining population. But in TV version, handmaids are many races and I may have even spotted a black Wife (though I am still not sure). While I think it makes for a better show to have a more racially heterogeneous cast (Samira Wiley as Moira is phenomenal), it obscures the powerful links between sexism and racism, particularly in the United States.

Audre Lorde, a renowned black feminist lesbian activist wrote, “there is no hierarchy of oppression.” What she meant is that discrimination and oppression based on race, sexuality, class and gender all stem from the same logic of superiority and belief in the right to dominate. What this means is if we continue to promote some women while restricting the rights of racial minorities, LGBTQ citizens, and ignoring class inequalities, then we fail at gender equality. Additionally, since humans are complex and one’s race, class and sexuality impact one’s experience of gender, including just any woman will not do. As evidenced in the show, women often play a key role in the oppression of other women. One could have 60% women in government or an all-female corporate board, but if they advocate for restricting other women’s rights, or restrict wages and advancement, or are all from the same racial and class background, then women’s presence hardly promotes emancipation.

Handmaid’s Tale is a timely reminder that rights are never just ‘given’ to anyone, and the possibility such rights can be removed and restricted always lingers. Until we stop thinking that adding women to institutions is enough to create gender equality, this reality will remain. Domination is complex and it takes a complex and inclusive social movement that recognizes the magnitude of oppression in order to truly emancipate anyone.

Kara Ellerby is Assistant Professor in the Departments of Political Science & International Relations and Women & Gender Studies at the University of Delaware and the author of No Shortcut to Change: An Unlikely Path to a More Gender Equitable World (NYU Press, 2017).