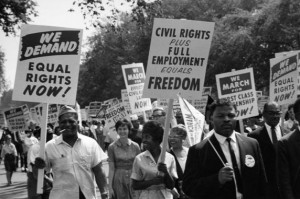 The March on Washington had a very specific purpose – to present President Kennedy and Congress with a list of demands designed to secure basic civil and human rights for African Americans. The 50th anniversary of the March on Washington, therefore, should not only be a time for sharing snippets of Dr. King’s most famous speech, but also an occasion to look back at the marchers’ demands. Assessing which demands have been met and which have yet to be met will provide a much more accurate picture of how far the nation has come in terms of providing equal opportunity for African Americans than all of the well–meaning recollections and recitations of “I Have A Dream” put together.

Leading the marchers’ list of demands was a call for meaningful civil rights laws. At the time, federal civil rights measures lacked teeth. Prosecutorial power was limited and punishments for racial discrimination were light, if they existed at all. In 1964, major civil rights legislation was passed in the form of the 1964 Civil Rights Act. But many complained that it too lacked teeth, and were especially bothered by the absence of provisions to prosecute those who attacked civil rights workers. Today, it remains extremely difficult to bring to justice perpetrators of crimes where racial bias and discrimination were clearly at play. The failure to convict the murderer of young Trayvon Martin underscores the point.

The marchers’ demanded a massive federal work program. The economy was sputtering and hit African Americans especially hard. It was hoped that a New Deal-like jobs program would see the nation—and African Americans—through the downturn. But the federal government never invested in another work program. In fact, during subsequent economic downturns, including the Great Recession of recent years, it established a pattern of propping up large corporations and firing and laying off government employees, rather than expanding employment opportunities to the unemployed and underemployed.

Along with the demand for a massive federal work program, the marchers called for full and fair employment. African Americans were always the last hired and first fired. The only way to break this cycle was to insist on full employment for everyone. Fifty years after the march, America hasn’t come close to full or fair employment. Worse, a large percentage of the nation’s workforce, and disproportionately high numbers of black workers, don’t even earn a livable wage. Meanwhile, debate rages in Congress about nickel and dime increases to the minimum wage.

A major issue for the marchers was decent housing. African Americans across the country were routinely discriminated against when it came to housing, forcing many to live in overpriced, overcrowded dwellings in segregated neighborhoods. Little has changed over the years. In fact, patterns of residential segregation have increased as suburbs have spread and gentrification has reclaimed select urban spaces as exclusive white spaces. And the recent collapse of the housing market has exposed the ongoing vulnerability of black middle class homeowners to discriminatory lending practices.

The right to vote was also a central concern for the marchers. No constitutional right is more fundamental than the vote, yet black southerners continued to be excluded from the ballot box. In 1965, Congress passed the Voting Rights Act, providing new protections for black voters. But in the new millennium, a wave of state voter ID laws, combined with the Supreme Court’s recent overturning of a key element of the 1965 Voting Rights Act, have put the vote of tens of thousands of African Americans at severe risk.

The marchers’ final demand was adequate integrated education. Nearly a decade after Brown, segregated schools remained the norm in the South and white southerners remained as determined as ever to keep it that way. And half a century later, a race-based dual education system persists. In much of the South, black children attend public schools and white children attend private white Christian academies. In most metropolitan areas with large black populations, the divide is between urban and suburban school districts.

A lot has changed since the March on Washington, and it is wonderful that so many people are taking the time to recognize this historic event. But the sobering reality is that half a century after the march, the marchers’ demands remain largely unmet.

Fifty years from now, at the centennial of the march, I hope these demands will have been fulfilled. But given the slow pace of progress, and the determination of reactionaries to roll back the clock, I’m much less hopeful than I was just a few years ago.

Hasan Kwame Jeffries is Associate Professor of History at The Ohio State University, where he holds a joint appointment at the Kirwan Institute for the Study of Race and Ethnicity. He is the author of Bloody Lowndes: Civil Rights and Black Power in Alabama’s Black Belt (NYU Press, 2010).