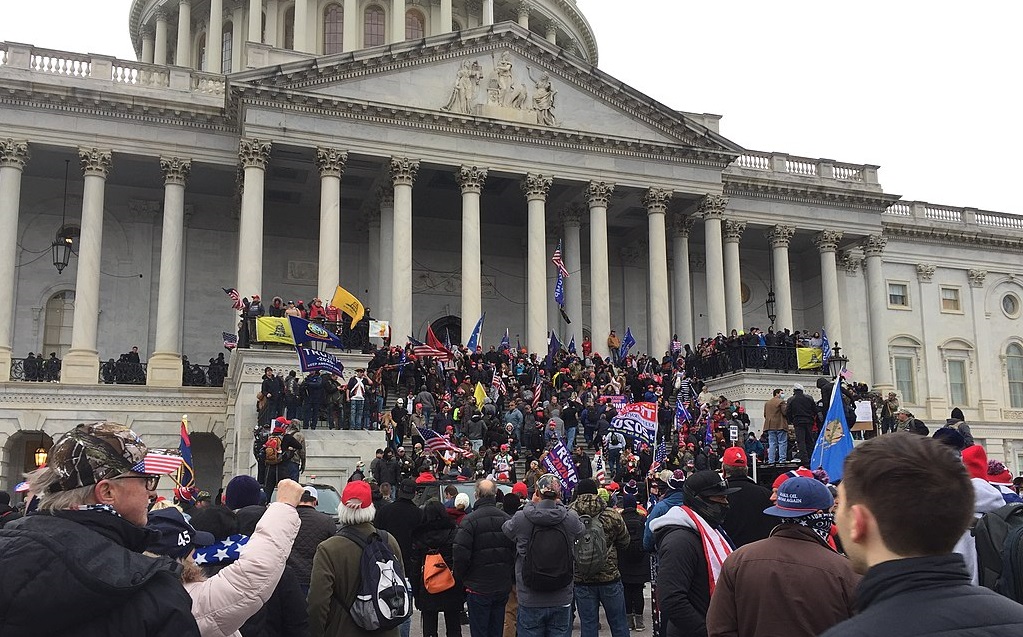 I am always wondering why there is not better theory about how misogyny enables/instigates racism, and the reverse as well. How is this possible after living under Trump for four years?  And, living and dying with Covid? Better theory means better thinking and language to see with; connecting the dots rather than severing them.

There are (at least) two threads to follow from Jan. 6: Trump and his white MAGA followers, some who are white women storming the Capitol against the multi-racial coalition in Georgia, led by Black women, taking over the Senate through electoral means. And Covid19 infects every breathe.

We need to see and think better because the horror of the Trump presidency was subsidized by the press, by dark money, by much of the Republican party, by over half of white people in the US, many of them women. None of this ends because Biden is president. Covid definitely does not.

Trump’s January 6 rampage—call it what you will, was a last-ditch attempt at saving himself. His followers—some of them intent on violence, stormed the Capitol determined as only a white misogynist supremacist mob could/would. Only a group of privileged white people aroused by their President could have thought that their debacle on Jan. 6 could succeed.

Much outrage followed the violence.  Condemnations of the lawlessness.  The overstepping.  The death and destruction of it all. Mitch McConnell finally accedes: Trump has violated our code: the rule of law. (Forget that law protects racial and gender and ableist injustice all the time. While you are forgetting, do not ask yourself how Biden ever became President in the first place, especially given all those competent women).

Lots of people asked how can this be America? (Of course, many did not.) Then, for healing we are offered the inauguration.  Lots of talk about how democracy has been saved.  That we won against the fascists.  That we might find the light.  Everyone feels better, including me, a little bit. But…

Inaugural day—was crafted as a day for healing—for what it is and what it is not. An end to Trump’s lawlessness—and rule of law won here; the sanctity of electoral politics—but do not confuse this with democracy.  Real democracy has yet to be built. We should have all taken a knee to make this clear.

When we look at the pomp and pageantry we saw what was intended: a phantasm of gorgeous people dressed by our finest designers looking peaceful and content.  The only one not so dressed was Bernie, who wore his now famous hand-made recycled mittens, and maybe Janet Yellen who I think was wrapped in a sleeping bag.

Many people feel obligated to be hopeful and renewed, whatever that means.  But hope is a privilege. Lay the scars bare; all 400,000 of them.

Everything is always at least partially new, and also old, when we are talking about power relations. Power holders are always moving around trying to find their new protections and capacities.  Their major guide, however, is to hide oneself in order to keep that power.  Covid has made this less possible.

Trump unveiled too much.  He put too much in the bold.  The secrets became truths especially with the assist of Covid—and he hates truth.  It is up to us to see what he has gifted: The absolutist formulations of overt misogyny to enhance overt white supremacy. The key word here is: overt, to be seen, to be named, to put in view. Successful politicians use systems of power while hiding and mystifying them. A good politician obfuscates.

I am compelled to understand that the present crisis of the state in part catalyzed by Covid needs an abolitionist socialist feminism remedy.  Women—especially women of color—are 80 percent of essential workers and have suffered so greatly. The loss of life, and jobs, and livable lives during Covid has been catastrophic for women across race and class lines. And yet, there is nothing democratic about the suffering.

I need to name the misogyny of this all. Jan. 6th was a new(ish) political explosion of white misogynist supremacy. Since 2016 Trump has been articulating, performing, exploring how an aggressive masculinity can re-mobilize white hatred. Trump’s brutish physicality is spoken through his hateful white supremacist language. He is the first President to actively mobilize both in such an overt form. MAGA white women operate as decoys for his agenda. (How can anyone think Covid is a hoax?)

Women are pussies to be man-handled and Black and Brown people are to be exploited and shot with impunity. Ta-Nehisi Coates says Trump is our first white president.  I want to tweak this and say he is our first toxic white masculinist president.  White supremacy cannot be extinguished if toxic masculinity is not undone.  And toxic masculinity cannot be dismantled without the toppling of white supremacy. They feed each other. They articulate each other. They nurture each other.

A full abolitionism requires a complete assault on each. Although the structural reality of racist misogyny is as old as our country, the overt mobilization of it and the unveiling of its usefulness by a sitting president is what is new. Trump gifts us this revelation. The fact that many white women choose this politics cannot allow it to obfuscate the power system that needs dismantling.

It is important to recognize that Trump’s right-wing zealots seen on the steps of the Capitol are very much ensconced in the anti-abortion politics of death and clinic bombings.  They are organized throughout and across state lines.  They use force and intimidation. They use guns to kill doctors and bombs to destroy clinics. At the Women’s Health Center, Derrick Evans targeted clinic staff and volunteers, calling them “deathscorts” and “baby murderers”. These are the very people who will not wear a mask.

Misogyny is unifying as both a method and commitment and a strategy of white supremacy. The strategy is terror-filled and deadly. Trump instigates and mobilizes from inside the government the violence of toxic masculinist white supremacy in explicit overt form. White women’s role in racist misogyny does not occlude that it is not as deeply misogynist as it is racist.

So toxic masculinity and white supremacy connect in this historical moment different from before. Each is used to heighten the push back against democracy. Both are activated and exposed. Let us start with this presumption and how we might understand more about this moment by doing so. Covid leaves us little choice.

What is the relationship and structural connection/s between misogyny and the present right-wing activists/rioters?  Women for America First applied for the permit for the Jan 6 debacle. Three of Trump’s campaign aides were involved in the organizing: Caroline Wren, a long time GOP fundraiser, is named as a “VIP Advisor” on the permit that Women for America First provided to the agency. Maggie Mulvaney, a niece of former top Trump aide Mick Mulvaney, is l also listed on the permit and worked for the Trump campaign. Other women reflect ties to the Tea Party movement.

These white women use white supremacy to navigate their lives in spite of misogyny as they did as owners of slaves themselves that gave them economic standing that otherwise they would not have had.  Stephanie Jones-Rogers shows in They Were Her Property that slaves could not be given to the husband, as all other property could be–without the wife’s permission—giving her a rare “standing”.

Many white women have been instigators, protectors, workers, enablers of white supremacy (the Klan, Jim Crow, etc.) One and one half million white women belonged to the Ku Klux Klan. Once women got the right to vote they were coveted for their racist support. These women have fought school integration and participated in lynching parties. Their power is different than men’s but its white and privileged none the less.

In sum: toxic masculinity IS the mode of the Jan. 6 white rampage and many white women are committed to this because of the surge towards democracy from other quarters.  MAGA women in Georgia, Colorado and Arizona continue to be key to Trump’s agenda as he fights impeachment and promises to lead a third, Patriot party.

While this insurrection of white supremacy was happening at the Capitol—the Black and and Brown and Asian voters of Georgia used their democratic right to vote and voted for Democrats and took back the Senate by doing so.

So two upheavals happened on January 6—one unsuccessfully fighting for misogynist white supremacy and another successfully for a multi-racial democratic country, led by Black women.  In Georgia the voting rights activists led by Black women like Stacey Abrams showed the world what a little bit of democracy can look like. Jon Osoff and Raphael Warnock flipped the Senate.

Right-wing white people saying no to the changing democracy and people of color saying yes. It’s the newest expression of the continuous civil wars of the US. The new electorate is saying no to Trump and his movement and yes to the new constellations happening. Even Twitter and Facebook had to follow suit. And more and more people are saying no to Covid.

The real question we must stay with is: whose democracy will this be? And a democracy that is radically free and equal and just. It is not all that promising to have a neo-liberal white man named Biden be the president for these negotiations. Each time I see Kamala Harris standing by his side I feel the lies we are still being asked to believe.

Eddie Glaude says we need hearings on white nationalism to expose these  hate-filled groups. And begin reconciliation and reparation. I am ready. And the guiding force must be an abolitionist socialist feminism.  White people who are willing must join with our sisters and brothers of color and build towards these unknown radical imaginings. It must be a planet free of Covid and all its horrific unfairness and death. It must be an abolitionist socialist feminist explosion of love and liberation.

One thought on “White Misogyny: From the January 6 Rampage to Inauguration”