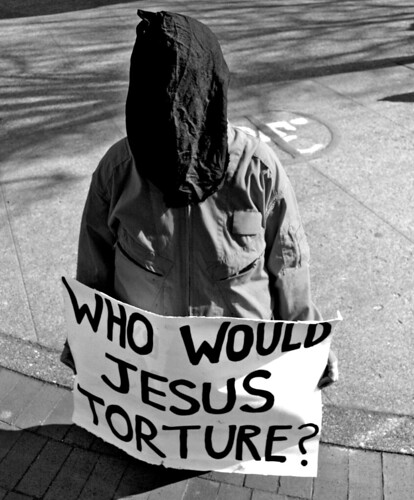 An article in the Huffington Post by Phil Zuckerman, author of Society Without God.

You might think that after all those tens of millions of Evangelical Christians watched The Last Temptation of Christ, they perhaps developed at least a mild disdain for governments that hire soldiers to inflict violent brutality upon their prisoners.

A new national survey just released by the Pew Forum on Religion and Public Life reveals that it is precisely those folks who ate up Mel Gibson’s blockbuster — church-going Evangelical Christians — who are far more likely to support the use of torture than non-religious Americans. And of several groups representing various religious orientations, it is secular Americans that are actually the group most opposed to the use of torture.

What’s the deal? I thought Christians were into things like mercy, love, and forgiveness. Not water-boarding. Maybe I missed it, but of the thirty or forty times that I’ve read the New Testament — particularly the Sermon on the Mount — I just don’t recall the “Thou Shalt Torture” passages. It is fascinating that on this clear question of morality, church-going Christians seem to be the most, well, challenged.