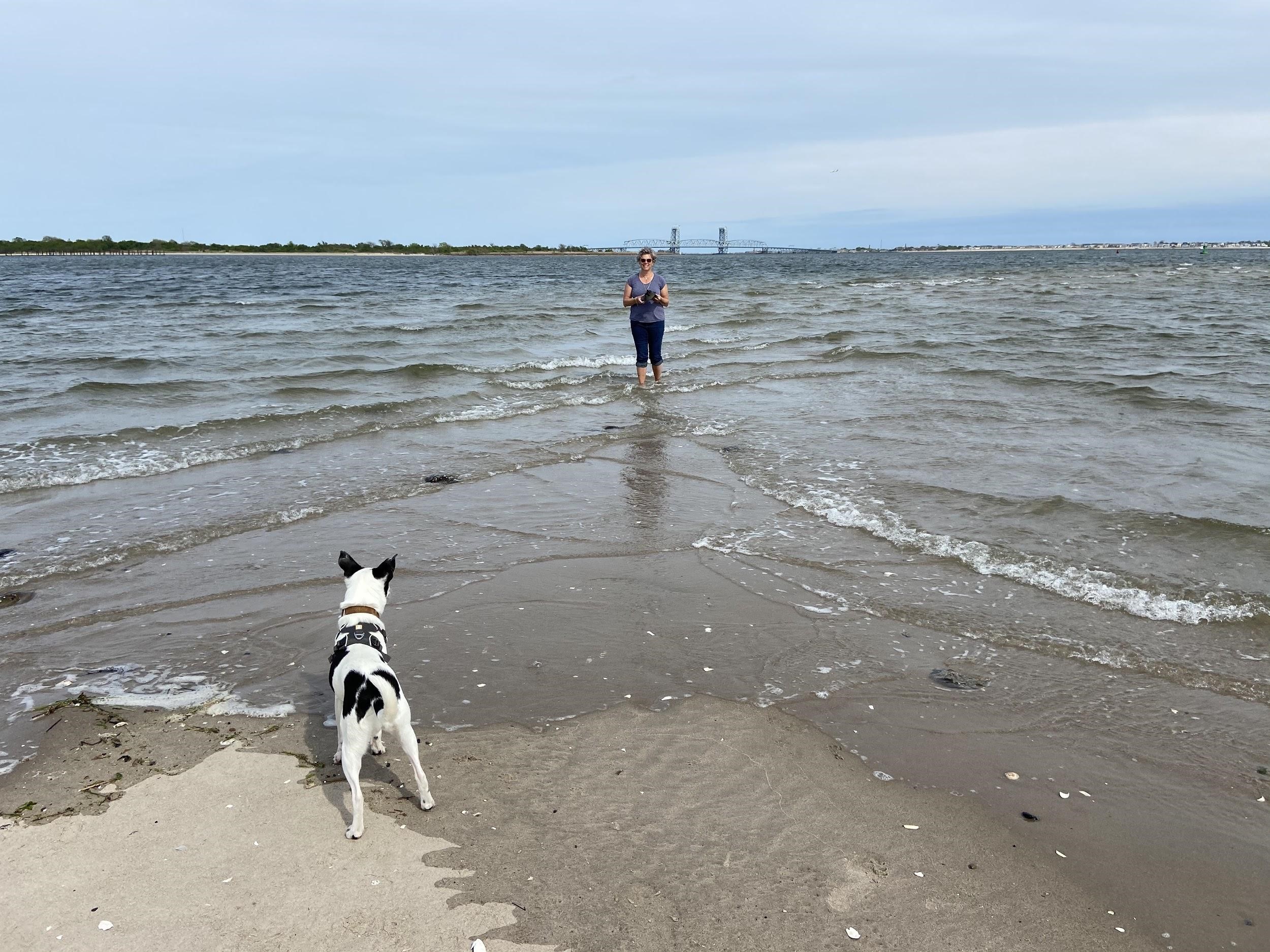 On May 24, about 8 weeks into a stay at home order issued by Governor Cuomo, I loaded my family into the station wagon for a mystery trip.  Family mystery trips can be called by anyone and involve participating in an unknown activity of the arranger’s choosing. The only rules are that you can’t complain and you must attempt to be enthusiastic. Pre-Covid we’d gone to Brooklyn cemeteries, Bronx pizza joints and botanical gardens, Manhattan art galleries and museums.

Understandably anxious and suspicious, the masked kids reluctantly got into the car. “Are you sure we’re allowed to do this?” my 10 year old asked. “Not really,” I thought as I vowed—“Absolutely!” I winked at my boyfriend who rolled his eyes. Thinking fast, I added “And we have Ziggy so we can always say we are going to walk her. Right?” Our over-exercised dog popped up her head over the rear seats. Traveling down the eerily empty streets, I waited for the kids to figure it out. Where were we going? My eldest smiled in the rearview mirror.  I happily exhaled. At least, she was convinced it was a good idea. We’re headed to Plumb Beach on a rescue mission.

The ocean-dwelling horseshoe crab of North America is a strange looking animal.  It crawls along the ocean floor with its maroon helmet-like hard-shelled top, ten eyes, and six pairs of legs and claws underneath.  A non-poisonous 4 to 5 inch hard tail, called a telson, is used to steer, or right themselves when they are overturned.  The telson is dragged in the sand as the horseshoe crab lumbers along the shoreline. Adult crabs weigh 3 to 5 pounds, are 18 – 19 inches in length from head to tail for females (a few inches shorter for males) and can live for about 20 years.  During spawning they are either on the beach around high tide or swimming in 2 to 3 feet of water.  When not spawning horseshoe crabs crawl along the bottom of the ocean at depth from 20 – 400 feet. On the shore, they are “slow and easy to catch” making them an ideal species for field biologists to study and engage students. And a perfect animal for my family to ‘save’.

At Plumb Beach, horseshoe crabs usually journey to shore in May for mating. As part of my fieldwork I learned a great deal about the vulnerability of horseshoe crabs to shorebirds and dehydration. Flipping them over when they get stuck on their backs is a simple way to help them. “Hello old friends,” I whispered as I waded into the cold water.  I moved around the mated pairs and singletons swimming gracefully in shallow water. The girls threw themselves into rescuing overturned crabs at the shoreline and took photographs of tagged crabs to register in citizen science projects.

For a few hours, as high tide rushed in and then receded, we occupied ourselves, physically engaged, handling the crabs, pointing out their battle scars of missing limbs, marveling at their barnacled surfaces, and speculating about their dented carapaces.  We seemed to forget the overarching yet mundane panic of daily life in lockdown. In the car ride back home, the girls estimated how many crabs they had flipped over or returned to the water and how many shore birds they chased away.  They reviewed the photographs of tagged crabs and anticipated entering them in a database once we were home. “Nailed it,” I softly squeezed my boyfriend’s thigh.

Later I texted pictures to Mark Botton, my generous key informant who immediately replied — “Plumb Beach?” He went on to text that his research team would not be conducting data collection this year due to Covid. I replied my heartfelt regrets. Despite finishing my research and publishing a book, I continued to join Mark on the beach during late spring and summer each year. His team investigates the mating practices of horseshoe crabs at this location. The leading expert on juvenile horseshoe crabs, Mark taught me how to find babies and measure them. It is pure joy to hold babies in your hand, miniaturized squishy versions of the adults.

Mark’s a crucial member of the International Union for the Conservation of Nature Horseshoe Crab Specialist Group, the organization responsible for determining species health for many animals. Horseshoe crabs (Limulus polyphemus) like the ones at Plumb Beach are listed as vulnerable meaning the species is facing a high risk of extinction in the wild in the immediate future. The loss of habitat, use for bait, and harvesting for biomedical applications has decimated the populations of the horseshoe crab in North America—and it is about to get worse.

The thing about publishing a book on an unusual topic (in my case, sperm, horseshoe crabs, bees) is that friends and family seem to enjoy texting any related news stories about your topic forever.  After thanking the 15 people who sent me the June 3rd  New York Times story, I considered the new threat to horseshoe crabs, bleeding them to test the multiple vaccines in development for Covid-19. Horseshoe crab blood is a key ingredient in a federally mandated test to make sure vaccines are safe for humans.

Let me explain. As hematologist Jack Levin and marine biologist Frederick Bang discovered in the 1960s, horseshoe crab blood could be used as an actual clinical diagnostic test for such diseases as spinal meningitis and bacterial sepsis. A blood-clotting defense in the crabs is one of the reasons scientists speculate that the species has lived through eons in seas teeming with harmless and pathogenic bacteria. The crabs have innate immunity, a defense mechanism that crabs are born with that creates an immediate reaction to antigens or infection triggered by endotoxins. As Mark Botton explains, horseshoe crab immune systems “are rather basic and contain amoebocytes. When they get an infection, crabs don’t have antibodies but instead they release materials from the bloodstream that can create an immediate clotting to ward off infections before they become systemic.”  Amoebocytes are mobile cells that perform a similar role to our white blood cells in defense against pathogens. This clotting difference is what makes it so valuable for humans. The clotting cells are used to create a test called LAL using horseshoe crab blood to identify for bacteria lurking on or in pharmaceuticals.

The real value of LAL is that just about every pharmaceutical uses water for production or processing. To remove contaminants, including endotoxin, pharmaceutical water is either distilled or filtered. Unfortunately, the systems used, especially filtration can become contaminated with Gram-negative, endotoxin-containing bacteria.  In high enough concentration, these bacteria (actually growing in the water or on the plumbing and filter surfaces) produce and shed endotoxin in a sufficient quantity to cause a fever if injected into a human or animal. Thus, the Food and Drug Administration requires injectables (such as vaccine) to be tested for both Sterility and Pyrogenicity. The regulations for endotoxin and LAL testing are another layer of safety for modern pharmaceuticals.

Despite a synthetic test being available to do the same work of horseshoe crab blood, to date the FDA does not accept this test as legitimate in drug trials.  Covid vaccine development will lead to many more horseshoe crabs deaths which makes the declaration of June 20, 2020 as International Horseshoe Crab Day even more ironic. We may have saved some crabs on May 24th, but perhaps they will die in the process of saving us? 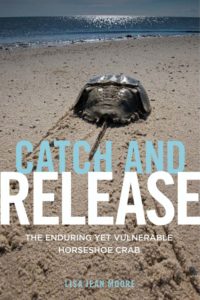 Lisa Jean Moore is Professor of Sociology and Women’s Studies at Purchase College, State University of New York. She is author of Catch and Release: The Enduring Yet Vulnerable Horseshoe Crab and Sperm Counts: Overcome by Man’s Most Precious Fluid and co-author of Missing Bodies: The Politics of Visibility and Buzz: Urban Beekeeping and the Power of the Bee. She is also co-editor of the collection The Body Reader and, with Monica Casper, oversees the series Biopolitics: Medicine, Technoscience, and Health in the Twenty-First Century for NYU Press.