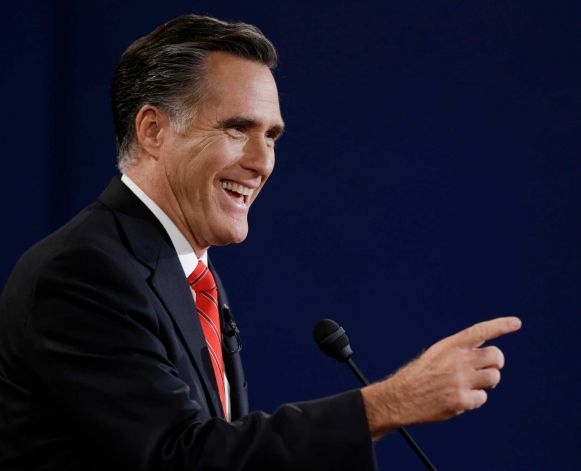 As the debate unfolded, my worst fears came to the fore: Democrats never win if they posture themselves as more responsible deficit fighters than their Republican opponents; that the goodies Republicans promise just don’t lead to deficit reduction. Whether it was Ronald Reagan or George W. Bush, and now Mitt Romney, they always make promises to pay for the tax benefits that they give by suggesting that the economy will grow enough to generate the necessary revenues. And Romney superbly articulated this thesis.

It always works because it avoids making difficult decisions on spending cuts; cuts that neither Republicans nor Democrats nor the American public wants to consider. It also works because the size of the federal debt is an unclear abstraction. When is the debt too large? It was 120 percent of national income just after WWII so the projected 90 percent isn’t so bad. And with low interest rates, the carrying costs are actually a marginal burden. So as long as the Chinese and others are willing the buy the bonds what’s the problem! And as Romney stressed effectively, Obama argued against tax increases for the rich a year ago, claiming we shouldn’t raise taxes when the economy is so weak; and economic growth is weaker now than it was then.

Romney also moved the discourse toward a comprehensive approach to tax reform. He proposed lowering tax rates accompanied by reducing the tax deductions that would be allowed. Romney was not too specific as there are a number of ways to accomplish this: Simpson-Bowles and Domenici-Rivlin are the two mostly widely discussed. Unrealistically, Obama claimed that he would only raise taxes on the wealthy, even though he is well aware that after the elections, comprehensive tax reform along the lines Romney is proposing will play a central role in tax policy deliberations.

Romney’s approach to the deficit should not sit well with the Tea Party followers. They heaped scorn on George W. Bush for not curbing spending to limit the deficit and claim they will not allow this to occur again. As a result, Tea Partiers will not be happy with a President Romney if he follows through with what he said at this debate. But if the American voters believe this more moderate Romney is the real Romney, Obama will have a much more difficult road to victory than he thought two days ago.

Robert Cherry is Brueklundian Professor in the Department of Economics at Brooklyn College of the City University of New York. He is the author of Moving Working Families Forward: Third Way Policies That Can Work (NYU Press, 2012).

3 thoughts on “Why Romney won the debate”