In these cold winter months, we’re looking to curl up with a good book. Luckily our sales and marketing director, Mary Beth Jarrad, has the perfect recommendation—Cecil Dreeme by Theodore Winthrop. Order your copy at 30% off with coupon code CECIL30, and check out an excerpt at the bottom of the post. 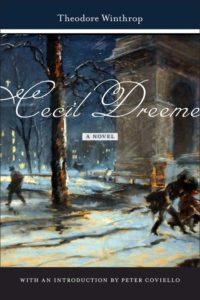 Cecil Dreeme was originally published in 1861, posthumously, by Theodore Winthrop, who was one of the first Union officers killed in the Civil War.  NYU Press published Cecil Dreeme as the first book in a new imprint, Washington Mews Books, which was created as part of our centenary celebration, in 2016.  Washington Mews provides a home for titles which celebrate everything about New York, both in reality and in spirit, and Cecil Dreeme is emblematic of both.  The original manuscript resides in the Fales Collection of rare books and manuscripts in English and American literature, at NYU, and the novel is set on the thinly veiled location of Washington Square.

It is also one of the queerest American novels of the nineteenth century.

The novel is the story of Robert Byng, who returns from a long decade in Europe, to find his life’s work in New York City.  He’s a chemist.  (There is mercifully very little discussion of his work.)  He takes a room in a dorm on NYU’s campus (also thinly veiled) and spins an idyllic fantasy about the person who lives in the room beneath his, an artist known as Cecil Dreeme.  Byng has no idea who Dreeme is, very few people in the building have even seen him, but Byng spends many pages spinning fantasies about Dreeme’s work and what he’s like and how he approaches Art. And then, one day, Cecil D doesn’t open his door for his delivered meals, and Byng and the building’s superintendent enter Cecil’s apartment to find him in a swoon.

This is by far my favorite scene, because Cecil D has been so absorbed in his work, he hasn’t eaten in days, and he’s fainted in front of his masterpiece, a depiction of Lear and his daughters.  And Cecil D has used his own likeness for the face of Cordelia.  Curious.  Robert Byng sends the super off to a nearby bar to get oysters, he goes to his rooms to get brandy and a yellow silk coverlet, and Cecil is restored to health under this combination of restoratives.  Byng and Cecil then become the most intimate of friends and have many discussions about the evil that lurks in the hearts of men.

What I love about Cecil Dreeme is that it’s so overheated.  Although it was not Winthrup’s first novel, it reads like the novel of a young person.  Every page is stuffed with classic references, not all of which still resonate (although it could be because my classical education is lacking), in a way that seems a bit desperate to impress.  It also wrestles with Big Themes, like Honor and Virtue and despair is felt when a character succumbs to Temptation.  But, lest this give the impression that the book isn’t fun, there is also one murder, one suicide, one faked suicide, two additional deaths from weakness of character, two cases of financial ruin, mistaken identity, forged letters, disguise, multiple betrayals, and a lot of walking around New York after dark.

This is a perfect novel to read in February, because it’s trying to hard to be serious, but it’s also a great beach read, just because the pacing is so headlong.  I don’t think anyone will really find the ending all that surprising, but you may rest assured that Goodness triumphs over Evil.  And isn’t that reassuring in these unsettled times?