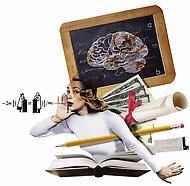 After reading the recent opinion piece “How to Be a ‘Woman Programmer’” by Ellen Ullman in the New York Times Sunday Review, I had two primary thoughts and reactions. Particularly as I neared the end of the article, where the barriers faced by women in technology were discussed, I was reminded of the interviews I had conducted in Silicon Valley and the metro New York area that reinforced exactly what Ullman said about why women patented at vastly lower rates than men. The percentage of women granted patents ranks significantly lower than that of their male peers in all disciplines, countries and sectors; it also ranks very low relative to the percentage of women in a specific scientific or technical field.

Ullman’s description of the encounters with sexist, clueless, or resistant men bosses brought to mind my interview with Rick Foot*. Rick Foot currently serves as president and founder of a very successful IT innovation company. In the past he has headed several research and development operations. Friendly and generous with his time for the interview, he began by explaining the patenting process.

He told me that he didn’t think there was a gender gap in patenting in the industry but that it must result from the persistently low numbers of women in the industry. When I explained the National Center for Women and Information Technology (NCWIT) study and the data showing that women patented at much lower rates than their participation in the IT workforce, he challenged the data with other questions about sector, publication rates, incentives, and age.

When he finally accepted that the data for the gender gap might be solid, he said, “I’m pretty sure that the women in R&D in my company patent at the same rate as their many male counterparts.” He did admit though, that he had never thought about gender or checked the data for his company which now he was intrigued to examine. Rick Foot was quite convinced that his view of the world—that there could not be a gender gap in patenting or if a gap did exist, it was proportional to the low number of women in IT—was absolutely true.

In contrast to the men I interviewed, all of the women knew what I meant right away when I raised the issue of the gender gap in patenting. They also understood how the gap served as a deterrent for women’s career advancement. Software engineer Joan Jetma* expressed the impact particularly well.

Joan works at a very large global IT company that prides itself on innovation and rewards its employees for patenting innovative discoveries. She had observed that very few women in the company where she worked obtained patents. When she did some research to determine whether her observations were correct, she discovered that about 10 percent of the women obtained patents at her company. When her own patent came up for review, she realized that all of the reviewers were men.

Because of the impact that obtaining patents have on women’s careers, some interviewees described the positive steps they had taken to enhance opportunities for women to patent in their company. One woman I interviewed, after observing the gender gap in her own company, started a support community for women. She sent an e-mail to about twenty women in the company and received immediate responses. In two years, the community has grown to 600 women who represent all sectors and all countries where the company is located.

This positive approach reflects the other major reaction I had to the article by Ullman. Despite all of the obstacles she had faced and the clear recognition that many other women might not wish to remain in technology, Ellen Ullman showed a clear passion for technology.  Her love of software engineering made her lash back, tough it out or change jobs to be able to pursue programming, no matter what.

During the last thirty years my studies of women in STEM have enabled me to interview more than 450 women scientists, technologists, engineers and mathematicians. As shown in Breaking into the Lab, the overwhelming finding that emerges from these interviews is the love and passion most women have for their work. They love science and technology and will do whatever it takes to pursue their passion. Just imagine how much more productive and creative they could be if the barriers were removed.

Sue V. Rosser is Provost and Vice President for Academic Affairs and Professor of Women and Gender Studies and Sociology at San Francisco State University. She is the author of Breaking into the Lab:  Engineering Progress for Women in Science (NYU Press, 2012).

* Names have been changed.