It’s New York Fashion week and the Kardashian sisters have been here in force. Yesterday, after juggling interviews, runway walks, and Uber filled traffic jams, all five managed to descend upon the Apple store to promote their new apps, which, according to The Cut blog of New York Magazine, featured “videos, photos, and musings from the girls about their lives and projects.” A reporter taking in the scene was struck when Kim, in full audience view, checked her hair in her iPhone camera, carefully smoothing a wayward strand. “Did she forget that we can see her?” Not hardly. In a brilliant moment of “casual authenticity,” Kim reminded us that she does exactly what so many of us would do, to ensure we are perfect for our close-up. No matter that, for the rest of us, a close up of that caliber rarely occurs. The KKs are brilliant at popularizing a way of being in the world that prior to the Instagram age was reserved for a rare breed of insiders engaged in specialized practices that were not for you and me.

There was a time when only fashion models had to “put on that show, 24 hours a day,” as one model I talked to in the pre-dawn of social media put it. Now it seems that every young girl who considers herself somewhat in the know about fashion and style feels the urge to constantly document her grooming, outfits, and exploits. During this fashion week more than ever before, the streets have become runways in the world of Insta-girls populating our feeds. While everyone has always tried to stand out from the scrum of fashionistas milling about between shows, it is striking how many were named by name in the various news outlets’ now obligatory ‘street fashion’ slide shows. Editors, bloggers, and models all were carefully documented, with only the occasional anonymous shot of a fantastic peacock, a courageous unknown in a sea of bold facers. It seems the adorable fashion students who used to hang around the tents, hoping to soak it all up by osmosis, are now jockeying for position with the self branding fashion bloggers, already, or about to be, well known. Being always ready to be photographed has become a profession of sorts, and it didn’t start with the Kardashians.

Historically, models worked for the camera in the studio, at the fashion show, or on the runway. They carefully protected their image; a 1950s Ford model who had sashayed about in crinolines, carrying her model-signature hatbox, recalled ducking into movie theaters to make herself scarce between calls. Superstar model of that time Jean Patchett similarly didn’t want to overexpose herself, believing that “the more you are seen, the less you are wanted.”

Careful management to avoid over exposure now seems quaint, but the mid century titan of model makers, John Robert Powers, would have had no truck with the I-just-woke-up-this-way, #nofilter, mentality. He managed his ‘girls’ within an inch of their lives, carefully staging photo ops for the press, where his carefully coiffed models went about their anything but normal lives. He observed:

“If Mrs. Smith cooks and keeps house for her husband it is of interest to no-one but Mrs. Smith. But when a model has domestic tastes, she is photographed buying groceries, basting a roast, taking her baby out in his carriage.” 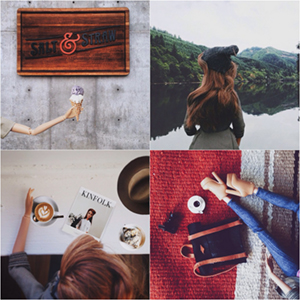 Sounds a lot like everyone’s Instagram or Facebook feed, but before the image onslaught of the digital age, regular people weren’t staging their lives as if they were on a movie set. It was a model’s job to “epitomize romance for the average person, to represent the story-book heroine in real life, to live more colorfully than other people.” Fast forward to the Instagram age, and it seems that everyone feels the pressure to live more colorfully, beautifully, to be the hero of their own show, engaging in what I call “glamour labor,” the work to look like your tightly edited, highly filtered image in the flesh. In a perfect send up of these kinds of pressures, a fictitious Instagram account depicts a hipster Barbie doll’s golden idyll of sunny hikes, coffee dates, and rugged boyfriends. While completely contrived, it nonetheless rang true with thousands, going viral in a matter of days. “Socality Barbie” shows quite literally how “plastic” Instagram, and those of us who feel the need to feed it, have become. In the endless chase for the perfect image, Hipster Barbie might just have us beat.

One thought on “Working it at Fashion Week”