Engagement ring sales drive the diamond market in the United States. But people purchase diamonds to celebrate all kinds of occasions, many of which are rites of passage: births, graduations, and weddings. As people experience these events, their social status changes, or is reaffirmed. They may get a new name, a new title or different responsibilities. In the case of an engagement, a woman moves from single to (almost) married and often, into adulthood (at least in the eyes of some people). In a wedding, one becomes a husband or wife. And diamonds are sometimes given to new mothers or babies as a way to celebrate birth. But what about the ultimate rite of passage: death? 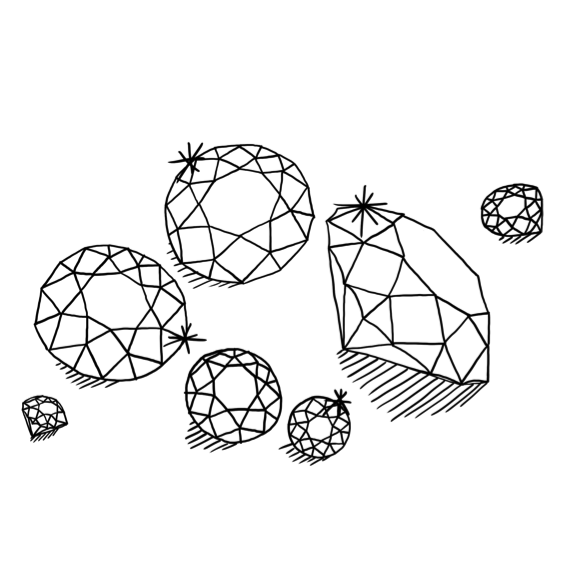 When I was working on my recently published book Clarity, Cut and Culture: The Many Meanings of Diamonds (NYU Press 2014), death was a theme that loomed large, even within stories of happy unions and new relationships. Many people told me about diamonds they keep hidden away in small velvet boxes because of the emotional power these glittering objects can exert upon us.

My friend Mabel described a diamond her grandfather gave her when she turned sixteen. Her grandmother had died when she was a young child but had asked that the diamond be given to Mabel when she came of age. Mabel treasures this diamond because it belonged to her beloved grandmother, and because it shows how she was already thinking of her granddaughter as the woman she would miss knowing.  But, Mabel told me, “I rarely wear it, and when I do, it makes me kind of sad.”

As it turns out, her grandmother had purchased it for herself. Her grandfather was “not romantic like that,” never giving her fancy jewelry. In what Mabel describes as a brave and difficult move, her grandfather came out following the loss of his wife, and so for Mabel, as much as she adores her grandfather, the ring not only represents her grandmother’s love for her, but also makes her think about “all of the things that she should have had, deserved to have—like romantic love and passion—that she did not get to experience.” The gem contains a story of generosity, family and attachment, but also of longing, even sacrifice. Perhaps Mabel would have the stone reset, or she could pass it on to another family member in the future, but it is hard to image gifting a stone with such a story to a new bride or fresh graduate.

On the other hand, in another story, a woman named Chandra keeps a small, but well cut diamond that belonged to her mother tucked away in the bottom of her closet. She explained that the stone was too much to wear (bear), bringing up memories of her mother’s early demise. But she knew it was part of a fulfilling marriage, passed on to her with the idea of having an heirloom for future children. And indeed, she is excited about passing it on to her nephews when they get engaged.

One thing I learned is that stories definitely stick to diamonds. But what about a stone that is not only associated with a story about someone, but is someone? The company Life Gem can transform cremation remains into diamonds, as a “memorial to their unique life,” which can then be set into a ring or pendant. The company website states that over 100 Life Gems can be made for the family in about six to nine months, and—in following the 4 C’s grading criteria used by the natural diamond industry—provides information on the color, carat size, cut and clarity of their product. The gems can be ordered in a variety of colors (from clear to varying shades of blue, yellow, red or green), and they come in several shapes, or cuts, such as round, princess and radiant, although all are expected to have flaws (just as most natural diamonds have). The diamonds are sized from 0.1 to 1.5 carats, but the company expects to develop an ability to make much larger stones in the future.

I know I was pretty surprised when I first learned of people making synthetic diamonds from cremation ashes or even hair, but, then again, a diamond is just carbon that has been submitted to tremendous heat and pressure. Here we have a man-made stone whose value comes not only from one’s memories, but from enjoying an actual material connection to a loved one. Barring a catastrophe, these diamonds really will be around ‘forever.’

Susan Falls teaches anthropology at the Savannah College of Art and Design in Savannah, Georgia. She is the author of Clarity, Cut and Culture: The Many Meanings of Diamonds (NYU Press 2014).

2 thoughts on “Diamonds and death”