Doing Time in the Depression, Ethan Blue’s seminal work on prison life in the 1930s, is coming out in paperback next month! To celebrate, we pulled one of our favorite excerpts from the book to share with y’all.

In the passage below, Blue takes us into the world of prison sports, starting with the king of all penal sporting events: the Texas Prison Rodeo.

Prison sport in Texas shared something with sports in California and elsewhere. Inmates in Texas played baseball, they boxed, and they even had volleyball. While black and white athletes might play together in the San Quentin or Folsom baseball leagues, this was unthinkable in Texas, which sponsored firmly defined white and Negro leagues. But penal sport in the Lone Star State had a peculiar twist. Rather than private affairs, prison sports and celebrations became massive, public spectacles. 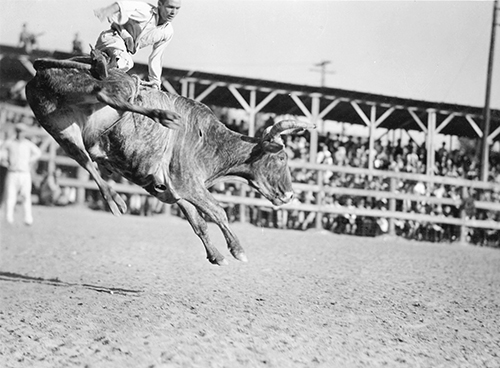 The Texas Prison Rodeo, originally billed as the “Fastest and Wildest Rodeo in Texas” (later expanded to “the World”) was first instituted in 1931 as a self-proclaimed progressive reform. Lee Simmons, who claimed the rodeo as his brainchild, thought a rodeo would be cheap entertainment for prisoners and guards. It was this and more—the rodeo ballooned into a huge public relations success and a source of considerable income. Audiences grew from just a few hundred in 1931 to tens of thousands by the end of the decade. The prison stadium was built, expanded, and rebuilt to hold the overflowing crowds, thousands of whom were regularly turned away for lack of capacity. According to prison official Albert Moore, the first Sunday’s rodeo in 1939 drew “the largest crowd ever to witness a rodeo in the United States.”

The rodeo drew from Lee Simmons’s invocation of the slaveholding tradition of forcing captives to celebrate. Its form was of an imagined Texas frontier past. A radio advertisement hyped the event, where “one hundred and fifty daring inmate buckaroos will clash with outlaw broncs, vicious brahma bulls and steers, which have been brought in from the outlying reaches of the vast farmlands and river bottom pastures of the System. It’s a case where outlaw meets outlaw! And there will be action such as you have never seen before.”

Baseball may have been America’s game, but rodeos held a special place in Texans’ hearts. The rodeo accessed a different form of nationalism and statemediated identity than baseball did. Like baseball, the rodeo was notable in the way that it structured the temporality of the prison year, and in the way its creation of “leisure” validated the existence of “labor” as an organizing force of life. But unlike baseball, the Texas rodeo was based in an Anglo-Texan memory of the American West, steeped in the lore of the open frontier.

For more information on this book, visit our website.

One thought on “Doing Time in the Texas Prison Rodeo”