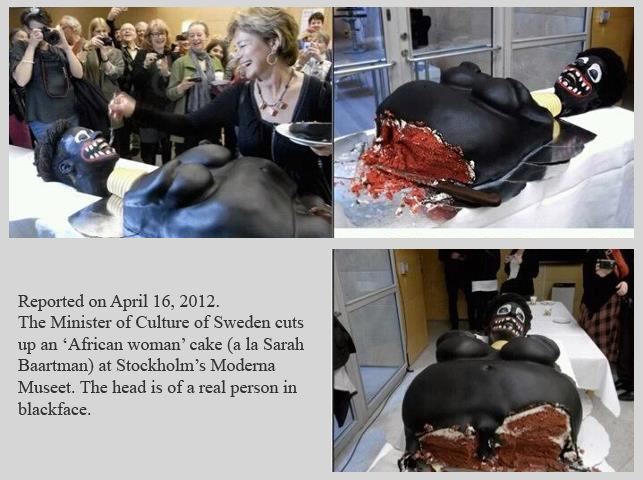 So, people have been sending me the link to the premier article on the ‘racist cake’ spectacle, asking me what I think of the most recent eruption of a trope that I have been talking about for years, of the black body fantasized as edible. (You can find the article I published in the Eating Callaloo anniversary issue in 2007 here; my book, Racial Indigestion, will discuss this image, as it manifests in the 19th century, at length. Below are a couple of images from the book, forthcoming from NYU Press.)

But hey, all you need is one drop, as it were, of human decency to see why this is wrong. It’s not just the image, it’s the minister’s seeming delight in the image. It’s her penetration of the black figure’s mouth with a silver spoon. It’s the photograph shot from the cake vagina-up, the shock of blackicing cooling on red velvet dainty.  It’s the artist rendition of the woman’s mouth as open, smiling and jaw-broken and therefore always-already assenting to her fate. There are a thousand historical trajectories that “feed” into this, among them centuries of sugar (and now chocolate neo-) plantation slavery that tied sweetness to the laboring bodies that produced the commodity, as the thinnest form of cultural reward. Then too there is the erotic history of eating as a dissident and violent pleasure; the market in Africans that attempted to reduce them to commodities; the fundamentally damaged mode of non-relation that constitutes unquestioned whiteness as an ever-voracious lack and punitive desire for the ‘other’ – now generally understood through the now well-rehearsed but still powerful phrase coined by bell hooks: “Eating the Other.”

And yet, it is worth asking, how many lenses mediate this image? A Swedish and Afro-Swedish event that became a U.S. event, more than an event, the kind of event-cascade that only the social media age can produce, there is a lot of momentum riding behind the arrival of an image like this one. Some of the response has been directed at excavating the artist’s intent (best described here); still others have criticized the response as a kind of gustatory pleasure itself, (“Have a Slice of Outrage!”). In general the response has been one of hurt, disgust, a return of historical trauma played out as shock, anger, apology, explanation. So ends another news cycle, affixed on a narrative of blame that is thus endlessly recyclable.

More interesting to me is the admixture of comedy, terror and substitution that has swirled beneath and between the dissemination of the event and its fraught reception, a critical breakdown that could only mean one thing: the West’s deep recognition of these images.  After all, only last year, Penguin Australia’s accidental publication of a cookbook that called for “ground black people” instead of “ground black pepper” actually boosted the cookbook’s sales; and Naomi Campbell (magnificently unfurling her cloak here) threatened to sue Cadbury’s over an ad for Bliss chocolate that said “Move over Naomi, there’s a new diva in town.” Being represented as chocolate was hurtful, Campbell told the press, and she was considering every possible form of redress.

We don’t like to look at these images, but it is worth thinking about what is lost – what forms of political passivity are acceded to – when we turn away. These orificial politics, as awful as they are to look at, lay bare the guts and underbelly of contemporary biopolitics, making visible the rawness of the black subject and citizen’s vulnerability to multiple forms of psychic and bodily damage, and finally, debility. (The last images are, after all, of a radically disabled black woman, cut off at the top of her thighs.)

I cannot speak to the value of the artist, Makode Linde’s, work, but I want to submit that, alongside his putative intention of rendering visible the agony of female circumcision (although the fact that he also considered making a chocolate Naomi Campbell might indicate that the circumcision issue was something of an afterthought), his work ultimately resonated because it redirected the political gaze to the mouth, the one site in the body that it is socially permissible to open in public, and that therefore holds symbolic power as a metaphor for the ways that power cuts into everyday living. Whether or not they intended it, then, Linde and the media forces that detonated the initial scandal around his work, forced us to look down the gorge of alimentary politics.

It was not, in short, the vagina that shocked us, but rather the eating, laughter and – in the videos – screaming that produced the most jarring effects. In the photographs and videos of the cake event, everyone laughs, no one more than the monstrous head of the black cake-woman, whose head is actually the male artist’s in female drag. The underbelly of the joke, Freud tells us, is aggression. Here, comedy sits atop a mountain of political terror, some of it deployed by the artist on the white women who encircle his performance, secure, momentarily, in their non-implication in history. Effaced as ever is the presence of black women, as agents of self-representation, as artists and historical actors, as legible witnesses to their own ongoing survival despite the comedy that adheres to their pain.

In laughter, in agony, while eating or kissing, the mouth – opened at will, wrenched open, slackened, weeping – forces our attention to the wet rawness of the sites where power lays us bare, where the line between the autonomic body and the social world softens to a mucosal wetness. The laugh opens the mouth and bares the body to the other; so does eating. But there are the eaters, and then there are the eaten.

Kyla Wazana Tompkins is Associate Professor of English and Gender and Women’s Studies at Pomona College. Her book, Racial Indigestion: Eating Bodies in the 19th Century will be released by NYU Press at the end of July.

One thought on “Eating, Laid Bare”