In 1904, J. M. Barrie prefaced his beloved play Peter Pan, or, The Boy Who Wouldn’t Grow Up with the words, “All this has happened before.  And all this will happen again.” (The narrator utters the same passage at the beginning of the animated 1953 Disney version of the story.) A few years earlier, the Swedish sociologist Ellen Key had coined the phrase “The Century of the Child” to describe the coming epoch, in which the lives of children and youth would be broadened and improved through enlightened policies and practices in education, social welfare, and parenting. 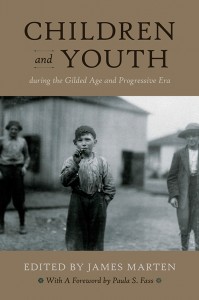 The tension between the meanings of these two highly quotable passages is reflected in the essays in Children and Youth during the Gilded Age and Progressive Era. Barrie’s words (taken completely out of context, I freely admit) suggest a repetitive and inevitable cycle of birth, coming of age, resistance, and resigned maturity. Key’s words suggest a linear, equally inevitable march of progress shaped by rationality and compassion. Neither fully capture the ways that the lives of young people were changed during the “long twentieth century,” but together they help explain this complex era.

The collection of essays covers the period that launched that so-called “century of the child.” Thanks to the countless surveys and studies launched by policy makers, “child-savers,” and members of the burgeoning profession of social work, there are almost limitless sources about the lives of youngsters available to historians of the period. And thanks to the changing constructions of childhood and youth, to incipient notions of governmental responsibility, and to middle-class concerns about the apparent decline of family, there are countless books and articles and editorials and other commentary on attitudes about children. As a result, this may be the most written-about period in the histories of American children and youth.

The eleven essays in the book show both the progress that Key predicted both the progress and the reluctance to change suggested by Barrie. This was an era when child’s play became a “right;” education became a central element of virtually all children’s lives; and governments and courts began to take up their responsibilities to American society’s youngest members. But many of the issues addressed by the authors have echoed down to the far end of the “century of the child” and beyond: concerns about immigrants, issues related to race and sexuality, and the role of children in the economy.

There were plenty of “lost” boys and girls living in the United States in the Gilded Age and Progressive Eras (for one great example, check out the defiant young mill hand staring out from the book’s cover, as captured by the National Child Labor Committee’s Lewis Hine), but there were also plenty of visionaries like Ellen Key who sought a better future for those youngsters, their children, and their children’s children. Children and Youth in the Gilded Age and Progressive Era offers a wide-ranging sampling of some of those stories.

James Marten is Professor and Chair of the History Department at Marquette University. He is author or editor of more than a dozen books, including the forthcoming Children and Youth during the Gilded Age and Progressive Era (NYU Press, 2014).