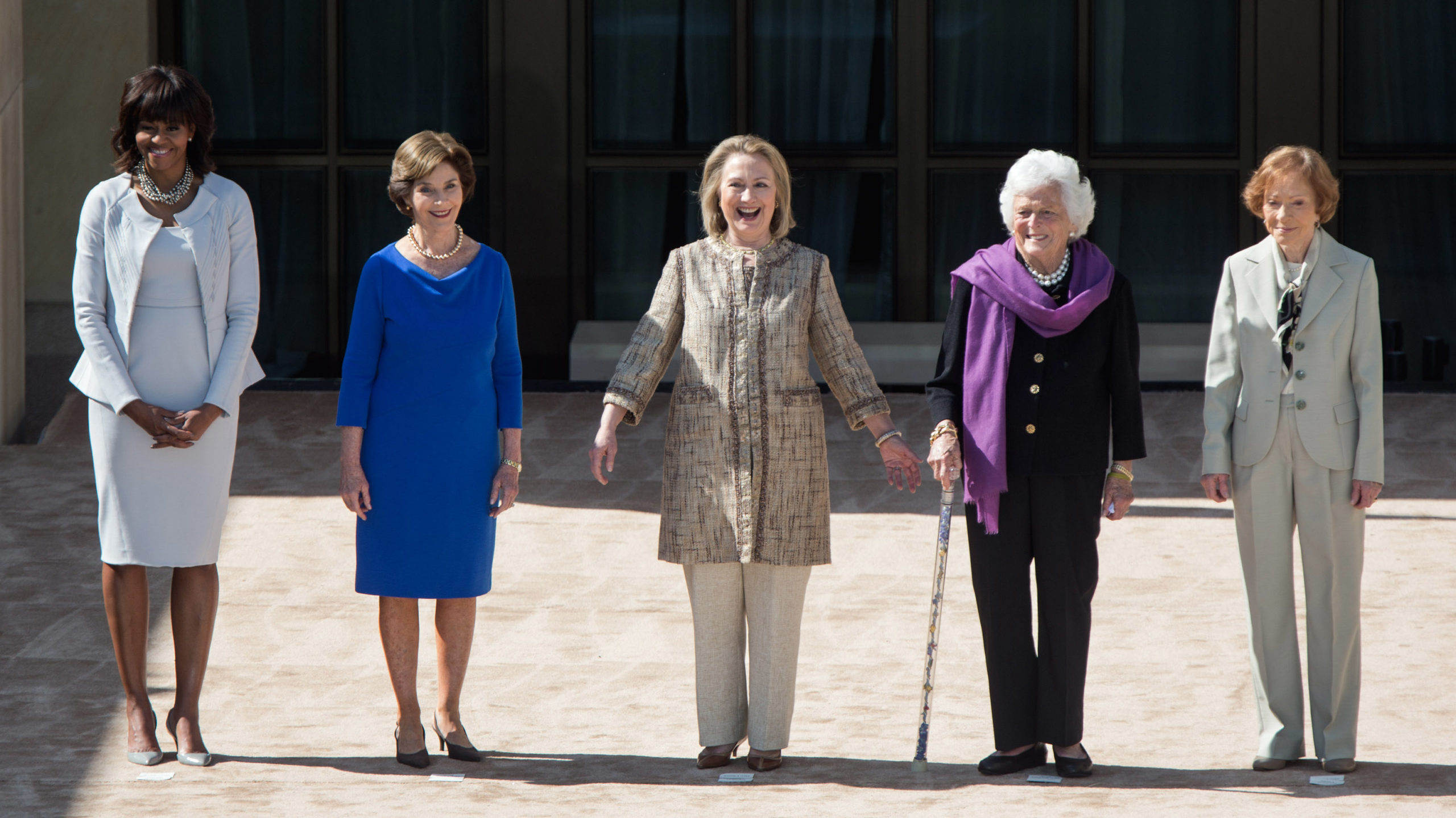 The recent funeral of respected former First Lady Barbara Bush gathered together not only five past American presidents but also three former First Ladies: Hilary Clinton, Laura Bush, Michelle Obama, and the current First Lady of the land, Melania Trump. Two of the women are fervent Democrats and two committed Republicans, with radically different social and political outlooks. Nevertheless, all share a common bond and experience that stretches back to the dawn of our national history, when Martha Washington had to create the quasi-official position from scratch, without a blueprint to follow. She and her next two successors, Abigail Adams and Dolley Madison, created a role that was uniquely American in both style and substance. Each of them shaped the role of First Lady by placing their own imprint upon the position, but at the same time they learned from one another as they sought a path that would bled their roles as women, wives, mothers, and very visible public figures.

Contemporary First Ladies have faced many of the same challenges and rewards that our inaugural First Ladies faced. From the first day their husbands took office, the original trio were subject to unrelenting public scrutiny and often stinging criticism in newspapers, the primary print media of the day. Martha Washington was taken to task for allegedly mimicking royal behavior, the strong minded Abigail Adams was derided as a political meddler who exercised undo influence over her husband John, and the charismatic Dolley Madison was considered by some to have been too ostentatious in style and extravagant in fashion. They were, indeed, all subject to unrelenting examination, but today’s public lens is wider and sharper, as it includes almost instantaneous examination and feedback via television, radio, email, tweets, and Facebook.

To this day, the role of First Lady has no official mandate, and while in practice it was and is oft times a very constraining and conservative position, it continues to hold the potential for significant power, for it reflects informal but still critical political, cultural, and social undertakings that affect matters of state. Since the time that Martha Washington became the original First Lady, not only Abigail Adams and Dolley Madison, but all those who followed have struggled with the proper manner in which to carry out the role, one that confers celebrity, public scrutiny, and at the least, close access to political power.

Yet, from the beginning, the members of this select “club” of First Ladies almost universally have carried out their roles with dignity, dedication, and perseverance and have helped play a pivotal role in shaping the contours of the development of the American nation. Every First Lady adopted at least one public cause; Martha Washington advocated for pensions for Revolutionary War veterans and more recently Barbara Bush was noted for her support of wider literacy and working to remove the stigma of depression. In their own ways, each of the First Ladies of the United States succeeded in putting their own distinctive stamp on the role of First Lady, whether it was in the political, cultural, or social arena. Over centuries, that complicated position, pioneered by Martha Washington, Abigail Adams, and Dolley Madison, often served as a lightning rod for real influence as well as controversy, a phenomenon that endures even to the present day.

Jeanne E. Abrams is Professor at the University Libraries and the Center for Judaic Studies at the University of Denver, where she is also Director of the Rocky Mountain Jewish Historical Society, and Curator of the Beck Archives, Special Collections.  She is the author of First Ladies of the Republic: Martha Washington, Abigail Adams, Dolley Madison, and the Creation of an Iconic American Role (NYU Press, 2018) and Revolutionary Medicine: The Founding Fathers and Mothers in Sickness and in Health (NYU Press, 2013).