In 2014, we published Wrongs of the Right: Language, Race, and the Republican Party in the Age of Obama.  We analyzed how racial fears, coded language, and implicit bias was deployed by the political right to oppose Barack Obama, his administration, and African Americans in general.  We also included how in 2011 reality-TV star “Donald Trump built a run for the Republican Party’s presidential candidacy almost exclusively on the racist and xenophobic notion that Barack Obama was not born in the United States.”

We ended the book by gesturing toward a crossroads for the GOP.  Reinventing the party to appeal to “an ever-browning America” or, as the data intimated, “the GOP is not taking active strides to present a fundamentally different racial ideology as it looks forward to 2016.”

The Party of Lincoln chose the latter.  The denigration of people of color, especially blackness, continues to be a an effective political strategy.

While much ink has been spilled in post-hoc analysis of the 2016 election, scholars are generally agreed that voters with a strong sense of white racial identity and who believed whites were being unfairly discriminated against, were most likely to support Trump over other candidates.  Moreover, Trump held immense support among voters who held racial and religious anxieties about immigration, whereby pledges to “build a wall” and ban Muslims further solidified white GOP support.

Many of these stances are core pillars of white nationalism, an ethno-racial political ideology and practice that mobilizes racial supremacy and/or separatism in the interests of white control of the nation-state. In specific, recent white nationalism employs four key themes that have been continually redeployed since 2016, and are poised to calcify a second GOP election victory in 2020.

Many white people believe they are unfairly under attack for simply being white.  Whether this whiteness-as-victim rhetoric is framed in terms of a demographic replacement by people of color (due to fertility or immigration rates) or a loss of “white civilization” via some kind of ethno-racial cultural dilution, increasing numbers of whites now believe that discrimination against whites is more common than discrimination against African Americans.  Whites tend to see racial diversity as anti-white bias.

The quintessential American citizen is increasingly thought of as white.  For example, the Birtherism movements (the political entrée of Trump) trafficked in the notion that Obama was un-American because of his blackness.  White Americans strongly associate traditional American symbols (such as bald eagles and American Flags) with white politicians (even if they are Canadian or British) than with Obama.  Foreign Whiteness fits most native whites implicit idea of an authentic American more than native Blackness.  American belonging is deeply racialized.

People of color are increasingly framed as dysfunctional or as pariahs of the social contract.  In this rendering, people of color unfairly benefit and take from white people who both deserve these benefits and who financially support the nation with their tax dollars.  This rhetoric often assumes that people of color are either biologically and/or culturally different than whites and thus unable or unwilling to assimilate, thereby placing undue paternalistic weight on white folks.

While the “Make America Great Again” slogan is well known, when was America so ostensibly great?  Asked in March of 2016 about when he thought “the United States last had the right balance,” Trump pointed to the Jim Crow era of the “late ‘40s and ‘50s.”  This was a time, Trump said, when “we were not pushed around, we were respected by everybody, we had just won a war, we were pretty much doing what we had to do.”  Many Republicans agree, recalling the 1940s and ‘50s most fondly.  While the “Leave it to Beaver” and “Ozzie and Harriet” media images of a white, nuclear, and prosperous family abounded, most white families never attained that level of affluence.  Nevertheless, such racial nostalgia appeals to whites looking to reclaim a way they never were.

These four themes have been directly employed in the recent rising threat of white nationalist terrorism, such as the alleged El Paso mass murderer who posted a manifesto that rails about a “Hispanic invasion”; the self-described white nationalist who was arrested in Ohio for allegedly threatening a Jewish community center, and; the alleged neo-Nazi who was arrested in Miami after threatening to kill Hispanics and who wrote that “I Thank God everyday President Donald John Trump is President and that he will launch a Racial War and Crusade” in which every “dangerous non-White or Ethnically or Culturally Foreign group” will be sent to “Concentration Camps” or dealt with “Ruthlessly and Vigorously by the United States Military.”

While the effectiveness of white nationalist appeals are well-documented, is there a pragmatic alternative in an era of rising racial resentment?

There is hope, especially if we direct attention to how people of color and racially diverse constituencies organize to resist and provide alternatives to white nationalism.  As the comedian Dave Chappelle recent stated, “There’s only one thing that’s going to save this country from itself. Same thing that always saves this country from itself. And that is African-Americans.”  While political activism amongst the NAACP or Urban League has been somewhat recognized, both scholarly and public discourse often gives short shrift to black civic organizing.  This is especially true of black collegiate groups—such as Black fraternities and sororities—who have been at the center of the intersection of civil rights and politics.

Our forthcoming book, A Pledge with Purpose: Black Sororities and Fraternities and the Fight for Equality, documents how the last century of black collegians and alumni have endeavored to both “uplift the race” and the nation.  The founding impetus for these fraternal organizations is intertwined with a history of collegiate literary societies, white college fraternities and sororities, black benevolent and secret societies, the black church, and the broader racial milieu of exclusion and white nationalism.  This collective history bespeaks of fidelity to the overarching principles of racial equality and provides a template for political activity in 2020 and beyond.

And as members of BGLOs ourselves, we also critically analyze, in the wake of Civil Rights legislation in the 1960s, how and why BGLOs shifted tack. Litigation gave way to mentoring and public policy work changed to scholarships.  But many important questions remain: Did BGLOs ever truly test their limits? Did they do all they could to uplift the race? Did they draw exhaustively on their human and intellectual capital to help bring about social change, or did they choose the path of least resistance?  And perhaps most prescient, what, in the post-Obama era of today, are BGLOs doing to address voter suppression, police brutality, and rise of hate crimes in the lead up to 2020? 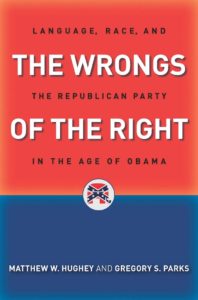 Matthew W. Hughey is Associate Professor of Sociology at the University of Connecticut. Gregory S. Parks is Associate Dean of Research, Public Engagement, & Faculty Development and Professor of Law at Wake Forest University School of Law. They are the authors of The Wrongs of the Right: Language, Race, and the Republican Party in the Age of Obama (NYU Press, 2014) and A Pledge with Purpose: Black Sororities and Fraternities and the Fight for Equality (NYU Press, 2020).

Featured image courtesy of Maryland GovPics on Flickr under the CC BY 2.0 license