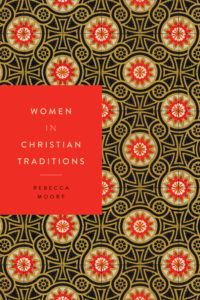 Below is a brief interview with Rebecca Moore, Professor of Religious Studies at San Diego State University and author of Women in Christian Traditions (NYU Press, 2015). The book, part of the Press’ new Women in Religions series, examines the roles women have played in the understanding of Christianity. You can read the full interview on San Diego State University website here.

Give us a brief overview of what the book is about.

Women in Christian Traditions offers a concise and accessible examination of the roles women have played in the construction and practice of Christian traditions, revealing the enormous debt that this major world religion owes to its female followers. The text provides an overview of the complete sweep of Christian history through the lens of feminist scholarship. It recovers forgotten and obscured moments in church history to help us realize a richer and fuller understanding of Christianity.

What inspired you to write the book?

I have taught courses on Christianity and on the New Testament here at SDSU and elsewhere for many years. The new spin, however, was to take a feminist approach to explain the history of Christianity, and this required original research on my part. I had incorporated discussions of women church leaders in my classes, but writing an academic book required much more study than I had previously done.

What did you learn from writing this book?

The most valuable thing I learned, and that I hope others will learn, is that women have played a major role in the development of Christianity. I learned of important figures, movements, and ideas that were somewhat unfamiliar. For example, because Protestant church leaders excluded women from participating in male missionary societies in the nineteenth century, women simply created their own missionary societies. They raised money, trained leaders and sent women doctors and educators abroad. I could go on at length about all I learned!

Why should people read this book?

NYU Press required authors in the series to limit their texts to no more than 200 manuscript pages. This means that the book is short and is designed to be reader-friendly. Readers will learn about inspiring women figures who have been largely lost to history because of the way Christianity is generally understood.