In a moving New York Times magazine story, Ruth Padawer reveals the treacherous terrain facing parents whose young sons wish to wear dresses and tiaras, polish their fingernails, or even refer to themselves as girls. She opens the article with an account of one such boy: Four-year-old Alex, whose parents were worried about his desire to wear a dress to preschool. Susan, Alex’s mom, wanted to let her son pursue his interests, but worried intensely about how others would treat him. She was terrified that he would be bullied at school, tortured by statistics that predicted her son would likely become a drug addict or commit suicide later in life, and often had panic attacks as a result. 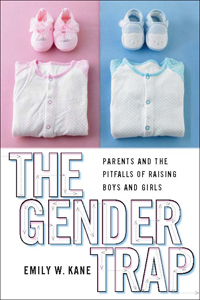 The complex tales of significant gender variation that Padawer reports are important ones, as is her analysis of how psychologists, pediatricians and other experts advise parents of “gender variant” children. But even parents whose children perform gender just a little differently, and parents who wish to encourage even a moderately more fluid approach to gender, face fears and anxieties as well. In my forthcoming book, The Gender Trap: Parents and the Pitfalls of Raising Boys and Girls, I interviewed parents of preschoolers, asking them how they think about children’s gender. None of these were parents whose kids would be classified as gender variant and none had sought any expert intervention—they were just everyday parents from all sorts of backgrounds, engaged in routine daily choices.

I figured many would tell me that they see gendered patterns in childhood as biologically dictated, while also reporting relatively unconscious everyday actions that reinforce and even produce those patterns. Some parents did follow that expectation, but many didn’t. And among those who viewed gendered childhoods as a product of social expectations rather than biological dictates, and who considered gender expectations problematically limiting to their children, I heard reports of an everyday world teeming with social pressures, judgments from friends, relatives, and even strangers if their kids didn’t stick to a narrowly gendered path. These parents were very much conscious of the social costs—to their children and themselves—of not living up to gender expectations. Consistent with Padawer’s analysis and decades of scholarship in gender studies, these social pressures are much more notable for boys (and men) who wander even a little bit off the socially dictated path.

Recent attention to significant gender variance in childhood, and to the struggles faced by transgendered people of all ages, is a welcome trend for those who wish to see a world unconstrained by gender rules. But the parents I interviewed offer a crucial reminder of just how far we are from that world, as even more minor variations—especially for sons—provoke fear, anxiety and careful management on the part of quite a few parents. For parents, the trap of pushing children toward traditionally gendered outcomes is sometimes baited by beliefs about biology, personal preferences, and unconscious actions. Even when it isn’t, the routine assumptions and everyday judgments of friends, relatives, teachers, children’s peers, and strangers can bait that same trap. Parents can try to create a less constraining world for their children, but the rest of us will need to suspend our judgments and applaud their efforts.

Emily W. Kane is Professor of Sociology at Bates College in Lewiston, Maine. Her forthcoming book, The Gender Trap: Parents and the Pitfalls of Raising Boys and Girls will be released this month.

2 thoughts on “Parental fear, social judgments, and the gender trap”