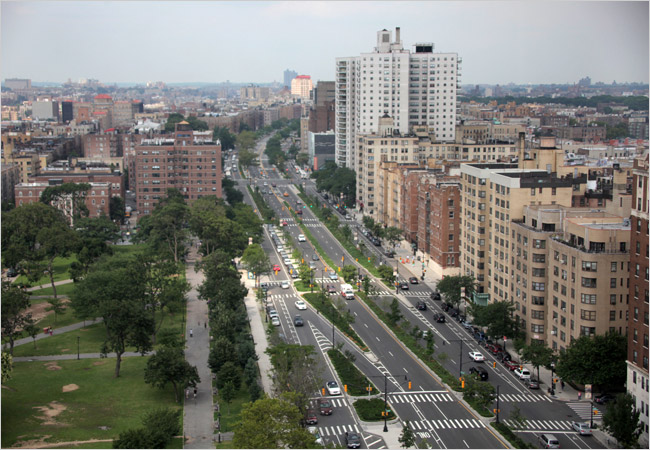 The Grand Concourse, the four-and-a-half-mile boulevard that for much of its life was described as the Champs-Élysées of the Bronx, has often sat for its portrait, as have many of the handsome buildings along its flanks. But there is one image that captures in poignant fashion exactly what the street represented in the mid-20th century.

t is a grainy black-and-white snapshot of a boy named Sam Goodman, a third-generation boulevard resident, wearing a dressy coat and hat and standing in front of the Lorelei fountain in Joyce Kilmer Park. Anyone who knew the area would recognize the luscious white-marble concoction of mermaids and riverfront siren, which had been created in Germany in 1893 and brought to the Bronx with much fanfare six years later.

Lorelei was not the boulevard’s only charmer. This broad, tree-lined street, the ultimate prestige address for vast numbers of the city’s upwardly mobile Jews, was also home to a movie palace where stars twinkled in a midnight-blue ceiling, a grand hotel where political intrigue played out amid marble columns and crimson carpets, and a stellar collection of Art Deco apartment houses.

That world has evaporated. The stars in the movie palace (now home to sports events and concerts with a Latin beat) are gone, along with the political intrigue in the hotel (now a residence for the elderly) and most of the trees. The 182-foot-wide roadway has been sliced and diced over the years. But Sam Goodman, the little boy in the snapshot, who now works as an urban planner in the Bronx borough president’s office, is hardly the only survivor of that era whose voice softens at the mention of the thoroughfare that even today, nearly a century after it was built, is considered one of the city’s legendary streets.