Having already declared June as LGBT Pride Month via a presidential proclamation, President Obama is prepared to further demonstrate his commitment to LGBT equality by signing an executive order designed to prohibit federal contractors from practicing employment discrimination against LGBT individuals. Obama’s action is necessary because the Republican leadership in the House refuses to allow the membership to vote on the Employment Nondiscrimination Act (ENDA), which the Senate passed 64-32. 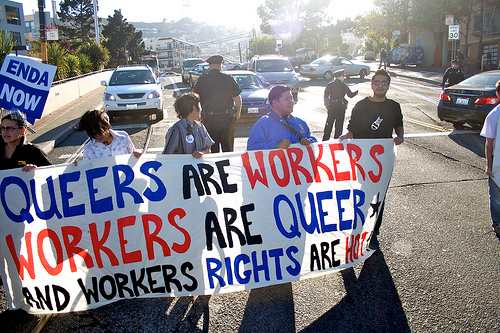 In short, ENDA would incorporate sexual orientation and gender identity into the protected classes of federal employment anti-discrimination law. (The current version of ENDA is not without its problems—the National Center for Lesbian Rights, Transgender Law Center and GetEQUAL, among others, withdrew support for the current bill, citing unprecedented religious exemptions for non-religious employers.) Even though 208 co-sponsors have signed on to ENDA in the House, including eight Republicans, Speaker John Boehner will not bring it to the floor. According to Boehner’s rather disingenuous reading of employment law, he finds ENDA redundant because he claims LGBTs are already covered by current legislation and does not want to afford “special rights” to any new minority groups.

If Boehner’s interpretation of our current laws was not motivated by his catering to his right flank, he would be in good company given that the majority of Americans think that it is already illegal to fire someone because of their sexual orientation or gender identity. Along with this common misperception, paradoxically, there is also a consensus that LGBT employment discrimination is widespread. A Kaiser Family Foundation survey of the general public revealed 67% of respondents answered affirmatively when asked if “LGBT people experienced discrimination ‘often’ or ‘sometimes’ in applying for or keeping a job.”

Given these conditions, it is unsurprising that in a recent poll of LGBT Americans, conducted by the Pew Research Center, employment protections topped marriage rights as the most pressing legislative issue. Although same-sex civil marriage equality gets most of the media attention, LGBT advocates and allies have waged at least as vigorous a campaign for employment protections.

Like most legislation, ENDA’s long, slow march through Congress began in 1974 when Bella Abzug introduced the Equality Act of 1974, a bill that outlawed address discrimination based on sexual orientation. After two decades of little to no movement on measures such as this, ENDA experienced numerous stops and starts during the Clinton and Bush presidencies.

Congressional momentum picked up in 2007 when Barney Frank and Tammy Baldwin, self-identified gay and lesbian members of Congress, championed the bill. The 2007 version of ENDA finally included gender identity as a category, which had been a sticking point for years, until Frank, over Baldwin’s objections, excised the gender identity protections from ENDA., justifying the move on the grounds that some members would not vote for a bill with gender identity as one of the protected categories.

In a surprising turn of events, almost every major LGBT organization, excluding the Human Rights Campaign, withdrew support of the sexual-orientation-only ENDA. Over 400 LGBT organizations joined forces to form United ENDA, pledging to actively work to delay, if not defeat, the bill if it excluded trans’ protections.

In my analysis of these events, I highlight how the gender identity provisions of the bill provided an occasion for solidarity, reversing the general trend whereby trans* and gay and lesbian issues are framed as separate and competing agendas. In this case, these advocates had to make a choice about whether or not they would fight for the rights of the whole LGBT community, or accept a partial victory for the LGB community. After examining the legislation, United ENDA argued that gender identity protections would prevent employers from exploiting the “gender identity loophole,” meaning that an employer could claim to fire someone for their atypical gender performances, not their sexuality.

What makes this case instructive for the future is how United ENDA placed trans* concerns at the center of their advocacy and used it as the glue for their coalition. Instead of treating trans* and gender identity matters as a fringe issue, they served a unifying purpose for rethinking what LGBT solidarity might look like. By rethinking LGB identities through a trans* perspective, the advocates understood that their identities could not be cleaved off as neatly as Frank would have liked to do. As we move forward, keeping in line with the actions of United ENDA, we need to make sure that LGBT politics work toward the good of the whole, and sometimes this may require us to focus more on our shared positions of vulnerability rather than our differences.

Isaac West is Assistant Professor in the Departments of Communication Studies and Gender, Women’s, and Sexuality Studies at the University of Iowa. He is the author of Transforming Citizenships: Transgender Articulations of the Law (NYU Press, 2013).

One thought on “Trans*politics, solidarity, and ENDA”