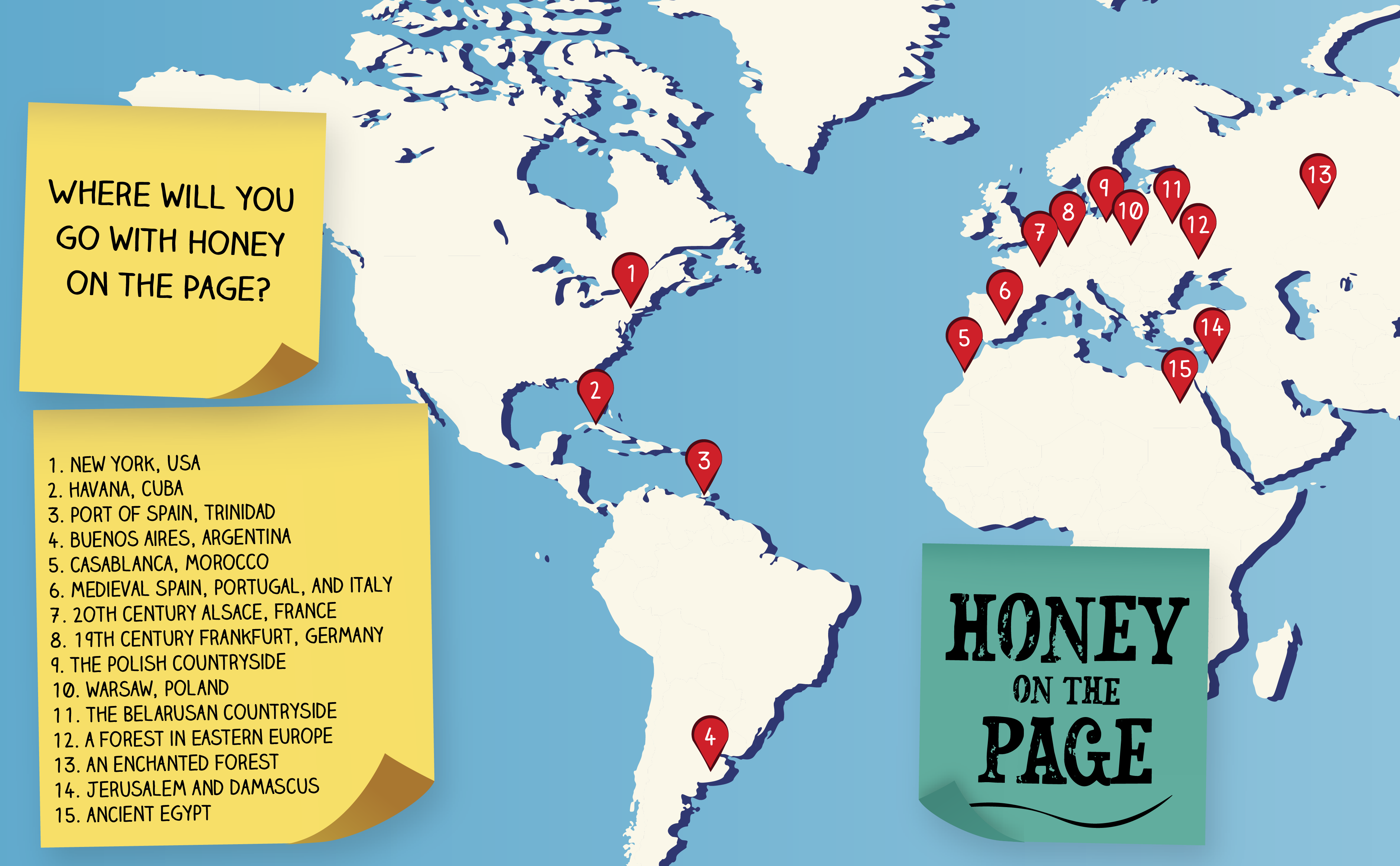 When I started selecting and translating the works that make up Honey on the Page, I was determined to show the wide range of the literature that had been written for Yiddish-speaking children during the long twentieth century: across continents, time periods and political ideologies. I knew there would be stories by fantasists and realists, men and as many women as possible, Zionists, socialists, and communists. I quickly surmised that there would be talking animals and kids going to school, angry winds and chickens who wanted to learn Yiddish.

What I could not have known at the anthology’s conception in 2013 was that it would be published over half a year into a pandemic that has led most of us to cease all but the most essential travel. I couldn’t have imagined that, in addition to reconstructing some of the lost world of Yiddish childhood, Honey on the Page would to re-expand our constricted world—if only from the safety of a comfy chair. So in the spirit of hopeful adventure that led traditional Jewish teachers to sweeten their pupils’ learning with a little honey on the first page of the school primer, let us embark on a tour of four continents as they appear in this plucky treasury.

(1) We’ll start in New York, home to four distinct Yiddish secularist school systems (which ranged in ideology from “just Yiddish” to “Zionist leftist” to “ardent communist) and also the setting for several of the anthology’s stories. Consider Khaver Paver’s tales of Labzik: A Clever Pup, a “leftist Lassie” who is always ready to save the day with his winsome repetoire of canine antics. Or take a look at the final story, the first chapter of a set of linked tales David Rodin penned about the intrepid bookworm Shprintse, the eponymous heroine of  “An Unusual Girl from Brooklyn.”

(2) Next we sail Havana and where Malka Szechet published the informative tale “What Izzy Knows About Lag Ba’Omer.” The author left Havana in 1954, and settled with her young family in Cincinnati. In order to track down the details of her life, I had to find her surviving son, Rabbi Máximo/Mordkhe Szechet, living in Omaha—so consider Nebraska a bonus stop.

(3) Onward to Trinidad, where Zina Rabinowitz set one of her postwar holiday tales, a pensive Yom Kippur meditation on the life of a descendant of Spanish Jews who found refuge from the Inquisition on the island.

(4) While we’re in Latin America, let’s pop over to Buenos Aires, a major hub of Yiddish cultural life during the first half of the twentieth century. That’s where, according to Lit-Man’s lighthearted tale, an absent-minded father takes his daughter along with him to mail a letter, and ends up chucking her into the mailbox instead. She enjoys a rollicking journey to Poland and back again.

(5) Rabinowitz obliges with another unusual locale for a Yiddish tale: an orphanage near the mellah, or Jewish Quarter, of Casablanca. While the setting might be atypical for Yiddish, the circumstances reflect all too eerily on our own worst fears. “The Mute Princess” describes, with grace and compassion, the rehabilitation of a girl traumatized by witnessing her parents’ deaths in the course of a pandemic.

(6) Jewish children’s authors took a keen interest in representing the Sephardic Jewish experience, as Isaac Metzker does in his life of the Iberian scholar and royal finance minister “Don Isaac Abravanel” as he moves from Portugal, to Spain and then Italy. The biography of this towering Jewish leader, who helped shepherd Spanish Jewry through the terrors and indignities of the Expulsion in 1492, refracted more recent genocidal programs aimed at the Jews, which would have been uppermost in the minds of his readers when the novella was published in 1941.

(7, 8 & 10) In “The Story of a Stick,” Zina Rabinowitz offers the multi-generational saga of a single Jewish family that originates in Frankfurt in the 1860’s, relocates to Alsace at the turn of the twentieth century, moves east to Warsaw after World War I, and continues—after a miraculous escape from invading German forces—on a kibbutz in Mandatory Palestine. Each generation is saved, improbably yet realistically, by means of a stick that was engraved for the paterfamilias in 1868 with a Biblical verse.

(9) We leave behind the modern, urban Warsaw of newsstands and hospitals for the Polish countryside at its most lyrical, as Sholem Asch depicts it in “A Village Saint.” Yashek is a boy on the cusp of bar mitzvah who learns differently than his peers and is widely ridiculed for it—none of which does anything to diminish his innate spiritual attunement to the natural world and all of its creatures.

(11) We actually have no idea where we are in Polish-Canadian poet Ida Maze’s lyrical ballad “Where Stories Come From,” other than, “Somewhere very far away,/Where wagons will not go—” but I like to imagine that she was conjuring the environs of her native Belarus. She invokes the utter desolation of the abandoned cottage, which is transformed one night by a mythical set of grandparents:

Hard by the hearth, a spinning wheel;

From silken thread, so thin and soft,

And, with the smoke, sends them aloft.

(12) Breathe deeply because this is a heavily forested part of the tour. Is this the forest in Lit-Man’s “The Birds Go On Strike” where a group of birds determine that none of them will sing again until their caged brethren in the cities are set free? Or is it the forest where the bird-pupils of Eliezer Shteynbarg’s rov-the-raven-teacher (rov means both “raven” and “teacher” in Yiddish) relearn “Stories from Genesis” through an avian lens? It’s both of these forests, neither of which is to be confused with the…

(13) Enchanted forest, in which Yankev Fichmann’s humble and brave Lipe the Tailor spends a paradisal day of rest in “A Sabbath in the Forest.”

(14) We continue our journey out of ordinary time to Jerusalem and Damascus, symbolically rich locales where Sholem Asch’s “Magnate of Jerusalem” undergoes a reversal of fortune that stimulates a wholly new understanding of how his Creator means for him to live and what true generosity looks (and smells) like.

(15) We conclude our tour in Ancient Egypt, where Levin Kipnis reimagines a Talmudic midrash about the safekeeping of the Israelites’ baby boys during the reign of the Pharaoh who would have consigned them to the waters of the Nile. Appropriately enough, each child is kept in protective isolation in holes in the ground until the “day of days” when they are delivered back into the sunshine by their liberator—or perhaps a safe vaccine. 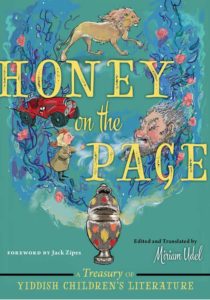 Miriam Udel is Associate Professor in German Studies and the Tam Institute of Jewish Studies at Emory University and author of Never Better!: The Modern Jewish Picaresque. She is the editor and translator of Honey on the Page: A Treasury of Yiddish Children’s Literature, now available from NYU Press.

2 thoughts on “Where Will You Go with Honey on the Page?”