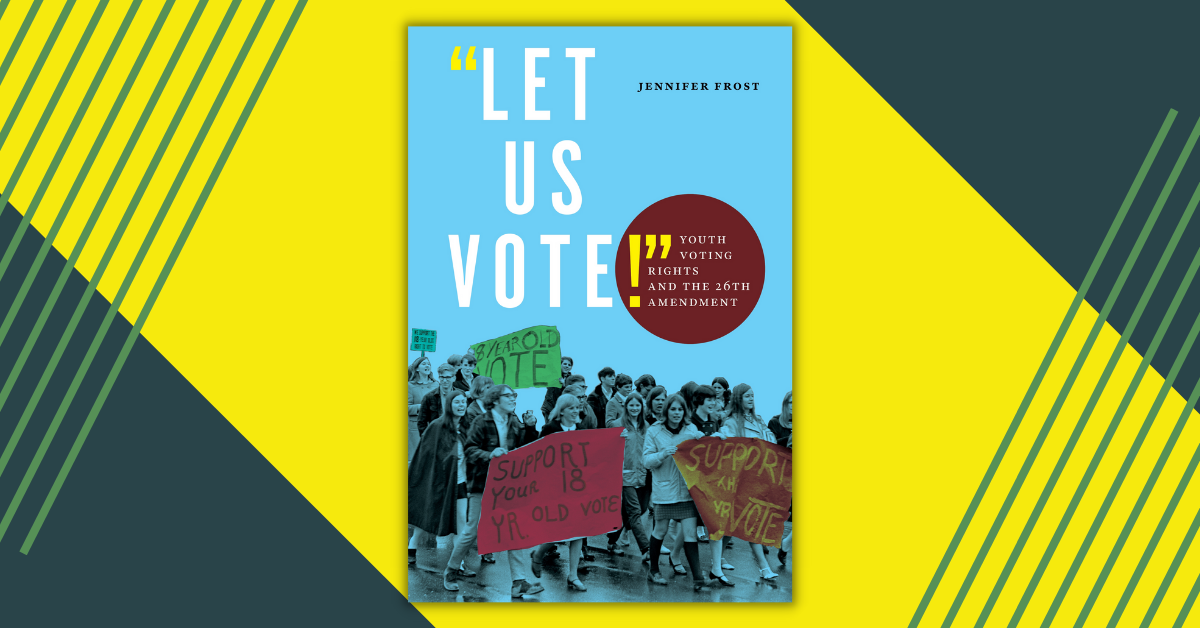 An essay by Jennifer Frost, author of “Let Us Vote!”: Youth Voting Rights and the 26th Amendment.

Absent from popular memory and most scholarly histories of the 1960s is the youth franchise movement, which achieved the 26th Amendment to the US Constitution in 1971.  This amendment gave the right to vote to 18-, 19-, and 20-year-olds and prohibited discrimination in voting “on account of age.”  Proposed, passed, and ratified fifty years ago, it was the last time the United States significantly expanded and protected voting rights. To many observers at the time and scholars since, the newest Amendment was “inevitable,” “a side issue,” and “not sought by and was of no interest whatever to the eighteen-year-olds to whom it granted the vote.”  My new book “Let Us Vote!” tells a different story about how the 26th Amendment came about.

Over a thirty-year period from World War II to the early 1970s, Americans, old and young, Democrat and Republican, in politics and culture built a movement and momentum to achieve youth voting rights.  But the 1960s were pivotal, and it was during the sixties that young people committed to their own and others’ enfranchisement came to the fore.  Student and youth groups started to organize campaigns on campuses and at the state and local levels.  Single-issue youth suffrage organizations spread.  Given that youth activism is one of the defining characteristics of the sixties, it makes sense that this was the decade when young Americans built a movement to lower the voting age.

Like all sixties movements, the youth franchise movement owed much to the African American struggle for civil and voting rights.  “The Civil Rights Movement was a ‘borning’ [sic] struggle,” activist, singer, and scholar Bernice Johnson Reagon has argued.  It is well known that the freedom movement offered inspiration and impetus for all the activism that followed, including the student, antiwar, feminist, and other movements.  Taken together, these movements created the circumstances and context during the sixties that made youth voting rights seem and in fact be possible.

This familiar story about the profound influence of the freedom movement on the sixties takes a pragmatic twist with regard to youth suffrage.  Civil rights organizations, leadership, and lobbyists were central to forming and furthering the youth franchise movement.  Even more, civil rights legislation, legal arguments, and court decisions provided the legislative and legal path for the 18-year-old vote.  Youth vote advocates and activists certainly drew inspiration from the freedom movement.  They also got lessons in politics and policymaking and a concrete, practical way to achieve their goal.

The student movement also played a pivotal role.  Starting with Vindication of Twenty-Eighteen Suffrage (VOTES) in Connecticut, student support for youth voting rights shifted into organized campaigning in the 1960s.  “Youth Keeps Eye on Ballot Box,” headlined one newspaper article in 1967.  That year, a UCLA student referendum on lowering the voting age passed with 2/3 majority.  The State Organization to Lower the Voting Age to Eighteen (SOLVE) constituted a political action group for students in Houston.  When the 18-year-old vote came before the Texas legislature that year, they testified to show “that the proposal is supported by those who will be most affected by it.”

In 1968, the 21st National Student Congress of the United States National Student Association reinforced its long-standing commitment to the cause with a mandate “to seek a lower voting age within the states” and “to support a lower voting age on Federal level.” Student governments across the country were already mobilized.  The Montana Student Presidents Association, representing six public and three private colleges and universities, were engaged in a statewide push.  A group of student governments in Iowa and Nebraska elected a student to act as a lobbyist for youth suffrage in their region.  The National Student Association then became a founding member of the Youth Franchise Coalition in 1969.

The anti-Vietnam War movement furthered the youth franchise movement as well.  The most influential argument for lowering the voting age was “old enough to fight, old enough to vote.”  With the draft age for military service at 18, yet voting remaining a right gained only at 21, this profound unfairness and injustice propelled young proponents.  First heard during World War II, this poignant rallying cry grew louder with the American war in Vietnam and echoed across youth culture and politics.  Barry McGuire’s 1965 hit song “Eve of Destruction” included the lyrics, “You’re old enough to kill but not for voting.’”

Yet, by 1969, public backlash against these three movements posed a challenge to leaders and organizers of the youth franchise movement.  Influenced by media portrayals that emphasized incidents of militancy and violence among young activists, some older Americans started to question the wisdom of youth voting rights.  Opinion polling found a fall in support for the 18-year-old vote from 66% in 1968 to 58% in 1970.  To ensure public and political support, the youth franchise movement engaged in coalition-building, education and outreach, and working with officials at every level of government.  Their efforts paid off with the swiftest passage and ratification of a constitutional amendment in United States history.

Looking back now fifty years later, amidst new measures to undermine and suppress voting rights, the achievement of the 26th Amendment cannot be taken for granted.  Enabling the right to vote—the fundamental tool of people in a democracy—to tens of millions of young Americans represents a centuries-long, even if altogether incomplete, project to transform the United States into a truly inclusive democracy.  The youth franchise movement of the 1960s furthered American democracy.  It’s a legacy we must remember, protect, and extend today.

Jennifer Frost is a historian of 20th century United States society, politics, and culture at the University of Auckland, New Zealand and the author of Let Us Vote!”: Youth Voting Rights and the 26th Amendment.