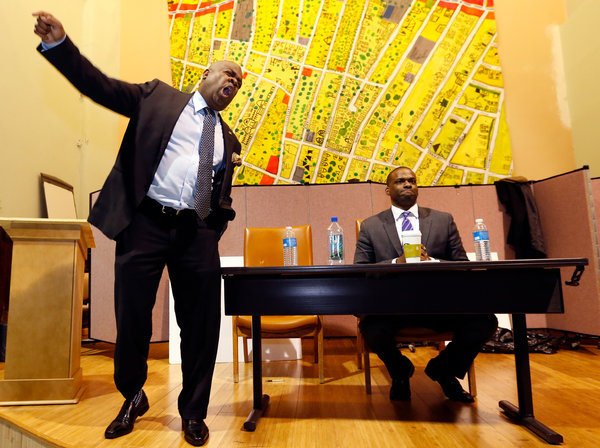 As I noted in The New Black Politician, Baraka and Booker are polar opposites. Booker is the Ivy-League and Oxford educated, suburban-bred son of IBM executives who brought a deracialized campaign persona, neoliberal policy proposals and tremendous national and international attention to the city. Baraka is the son of the late poet Amiri Baraka who brought his parents progressive, nationalist and activist sensibilities into formal politics. The only things these two men share are a common racial identification and birth year.

In the days since Baraka’s victory over law professor and former School Advisory Board Chairman Shavar Jeffries, many have asked whether this week’s election was a referendum on Cory Booker. My response is yes, in part. While Tuesday’s results do shed light on the current status of Booker’s legacy, the interpretation is far more nuanced.

Booker and Jeffries are neither close friends nor formal political allies, but they do have a few things in common. They are both Ivy League educated lawyers. Both have been advocates of school reform. Both employed deracialized campaign techniques to appeal to nonblack voters in Newark. And both were avid fundraisers. As a result of this, there are some similarities in Tuesday’s election results and results from the 2002 Newark mayoral race, where Cory Booker lost to then-Mayor Sharpe James. Booker lost by about 6.5 percentage points; Jeffries lost by about 8 percentage points. In 2002, Booker won the mostly Latino and Portuguese North and East Wards of the city; Jeffries did the same on Tuesday. As Marshall Curry suggests in his documentary Street Fight, Sharpe James had a better field operation in 2002; in 2014, Ras Baraka had a stronger field operation. In both cases, better GOTV contributed to the victor’s margin.

So to what extent was Shavar Jeffries’ defeat a reaction to Cory Booker?  Certainly, Ras Baraka’s base included people who were dissatisfied with the Booker administration. But a majority of voters may have been satisfied with Booker’s performance as mayor. Publicly released polls indicate that Booker had a nearly 70% approval rating in October 2012, and in my own polling in Newark in August and October 2013 put Booker’s unweighted disapproval rating at 37% and 24% respectively (Both of my polls have margins of + 7 points). While more recent news developments about alleged corruption and mismanagement at the Newark Watershed or the city’s $93 million budget deficit have likely tarnished Booker’s reputation, anti-Booker backlash is probably only part of the story.

The insider/outsider dimension probably best explains opposition to Shavar Jeffries.  Jeffries is different from Booker in large part because he is a native son. Born in Newark to a single mother, he was raised in the South Ward by his grandmother after his stepfather murdered his mother. Jeffries became active in the Boys and Girls Club of Newark, and when he finished law school and resettled in his hometown, he became active in the Boys and Girls Club leadership and on the board of a local charter school. While Jeffries was civically engaged, he wasn’t well known outside of his circle. And though Jeffries made an impressive showing in his school board victory, that election, with its low turnout and low visibility, did little to raise his citywide profile. As a result, in October 2012, 77% of Newark voters polled had no idea who he was. If there is anything I have learned about Newarkers in the twelve years I have been conducting research in the city, it is that they really want to get to know their political candidates. That Shavar Jeffries performed as well as he did is notable; however, voters would have to become more comfortable with him in order to elect him as mayor, and that takes time.

There are two parts to the insider/outsider dimension. Voters were paying attention not only to their familiarity with the candidates, but also to the candidates’ backers.  While Baraka assembled a grassroots coalition that was backed by labor unions, Jeffries received a strong assist from the Democratic machine. Political bosses Steve Adubato, George Norcross and Essex County Executive Joseph DiVincenzo backed Jeffries, lent volunteers and even raised independent expenditure money to promote Jeffries. This support made this mayoral race competitive, but it raised suspicions among some voters who were concerned about machine influence in Newark politics.

This point demonstrates the biggest difference between Booker and Jeffries. While both candidates attracted support from Wall Street, and while Booker sometimes strategically aligns with the Democratic Party establishment, Booker has largely been viewed as independent of the machine.  While surrogates certainly raise and spend money on his behalf, he is his own fundraising juggernaut. For now, that buys him leverage that Shavar Jeffries does not have. And while Booker is certainly sensitive to the interests of his donors (who can forget the brouhaha when Booker defended his friends in private equity from attacks from the Obama campaign on Meet the Press?), he does not need to rely on independent expenditure support to get elected. No doubt, some of Ras Baraka’s supporters were deeply troubled by Jeffries’ reliance on independent expenditures.

Going forward, Cory Booker’s mayoral legacy will be inextricably tied to Ras Baraka’s legacy.  Each mayor’s performance will reflect on the other. I expect that Baraka will govern differently. As a school principal who has been vocal in his opposition to School Superintendent Cami Anderson, I expect that he will push for a different approach to improving schools. I would also expect him to more heavily scrutinize economic development proposals and be less generous in the tax incentives that his administration offers.

The change in governing style will create conditions for a type of natural experiment where we can determine the effectiveness of neoliberal versus progressive approaches to achieving policy goals like attracting economic development, reducing unemployment and crime and improving housing options for city residents. If Baraka changes the city’s course and Newark thrives, then that will reflect poorly on Booker’s legacy. If Baraka institutes changes and the city falters, though, Booker’s vision will be vindicated.