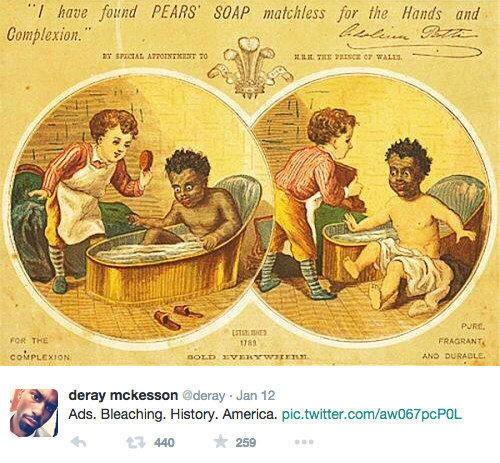 Had he wished to, @deray could have sent out dozens of such tweets, each with a different image. The tweeted image was but one of dozens printed between 1880 and 1915 displaying claims soaps could literally washed dark pigment off of skin. My forthcoming book, Clean and White, reproduces similar examples from Lautz Brothers, Kirkman and Sons, and Pearline. The latter featured an illustration of an African-American woman scrubbing a young child and exclaiming “Golly! I B’leve PEARLINE Make Dat Chile White.”

These racist caricatures focused primarily but not exclusively on African-Americans. Kirkman and Sons released an advertisement sometime after 1906 that referenced the year’s Pure Food and Drug Act. The ad showed three white women washing three wealthy Turkish men’s skin from brown to white. The accompanying poem tells the story of how the women were the Turkish men’s maids. They convinced the men to let them wash them with the soap, transforming their features to milky white. The story ended happily, with the now-white men marrying each of the maids. Cross-racial and cross-class lines were transcended, all through the miracle of a pure, cleansing soap.

Such a message was consistent with the trope that skin darker than white was somehow impure and dirty. Products boasting of absolute purity claimed to be so powerful that they could literally wash away the stain of race.

Why do these images matter as anything beyond century-old relics of America’s racist past? These images proliferated at a time when the rhetoric and imagery of hygiene became conflated with a racial order that made white people pure, and anyone who was not considered white was somehow dirty. The order extended from caricatures to labor markets. Analysis of census data indicates the work of handling waste (be it garbage, scrap metal, laundry, or domestic cleaning) was disproportionately done by people who were not native-born white Americans.

Through World War II, this involved work by African Americans and first- and second-generation immigrants from Asia, Latin America, and Southern and Eastern Europe. In the second half of the twentieth century, the burdens of this dirty and dangerous work fell heavier on Hispanic and African-American workers, creating environmental inequalities that endure to this day. They are evident in the conditions that led to the Memphis’s sanitation workers strike in 1968, as well as the residents of Warren County, North Carolina laying down in the street to block bulldozers from developing a hazardous waste landfill in 1982. Environmental inequalities are evident still in environmental justice movements active across the United States in 2015.

Since the end of the Civil War, American sanitation systems, zoning boards, real estate practices, federal, state, and municipal governments, and makers and marketers of cleaning products have all worked with an understanding of hygiene that assumes “white people” are clean, and “nonwhite people” are less than clean. This assumption is fundamental to racist claims of white supremacy, a rhetoric that involves “race pollution,” white purity, and the dangers of nonwhite sexuality as miscegenation. It is also fundamental to broad social and environmental inequalities that emerged after the Civil War and that remain in place in the early twenty-first century. Learning the history of racist attitudes towards hygiene allows us to better understand the roots of present-day inequalities, for the attitudes that shaped those racist soap advertisements remain embedded in our culture.

Carl A. Zimring is Associate Professor of Sustainability Studies at Pratt Institute. He is the author of Clean and White: A History of Environmental Racism in the United States from Monticello to Memphis (forthcoming from NYU Press).

One thought on “No scrubbing away America’s racist past”