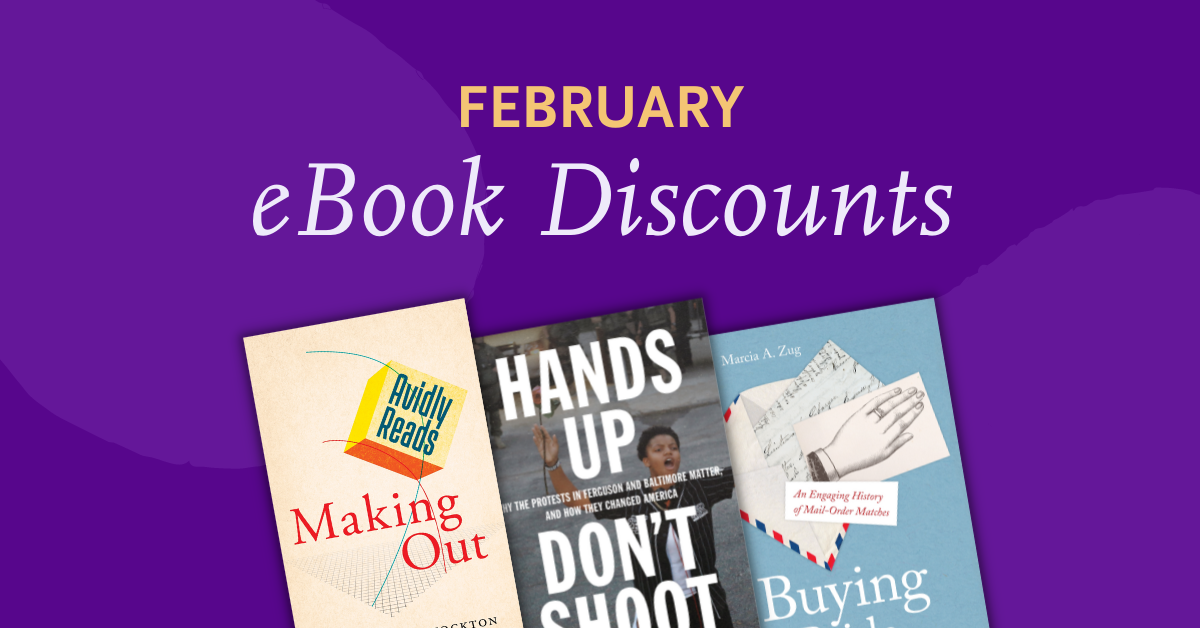 This February, NYU Press celebrates books on Black culture with a great selection of eBooks, on sale for just $1.99 from February 1 to 28!

A People’s Guide to Making All Black Lives Matter

The essential guide to understanding how racism works and how racial inequality shapes black lives, ultimately offering a road-map for resistance for racial justice advocates and antiracists.

In this essential primer, Tehama Lopez Bunyasi and Candis Watts Smith inspire readers to address the pressing issues of racial inequality, and provide a basic toolkit that will equip readers to become knowledgeable participants in public debate, activism, and politics.

Why the Protests in Ferguson and Baltimore Matter, And How They Changed America

A remarkably current, on-the-ground assessment of the powerful, protestor-driven movement around race, justice, and policing in America.

In this book, Jennifer Cobbina draws on in-depth interviews with nearly two hundred residents of Ferguson and Baltimore, conducted within two months of the deaths of Brown and Gray. She examines how protestors in both cities understood their experiences with the police, how those experiences influenced their perceptions of policing, what galvanized Black Lives Matter as a social movement, and how policing tactics during demonstrations influenced subsequent mobilization decisions among protesters.

THE GROUND HAS SHIFTED

The Future of the Black Church in Post-Racial America

A powerful insight into the historical and cultural roles of the black church.

In this book, Walter Earl Fluker passionately and thoroughly discusses the historical and current role of the black church and argues that the older race-based language and metaphors of religious discourse have outlived their utility. He offers instead a larger, global vision for the black church that focuses on young black men and other disenfranchised groups who have been left behind in a world of globalized capital.

RACIAL RECONCILIATION AND THE HEALING OF A NATION

Beyond Law and Rights

From Baltimore and Ferguson to Flint and Charleston, the dream of a post-racial era in America has run up against the continuing reality of racial antagonism. Current debates about affirmative action, multiculturalism, and racial hate speech reveal persistent uncertainty and ambivalence about the place and meaning of race – and especially the black/white divide – in American culture. They also suggest that the work of racial reconciliation remains incomplete.

This book seeks to assess where we are in that work, examining sources of continuing racial antagonism among blacks and whites. It also highlights strategies that promise to promote racial reconciliation in the future.

An Engaging History of Mail-Order Matches

“This provocative history of mail-order marriages challenges stereotypes about women who leave home to wed strangers.”

There have always been mail-order brides in America—but we haven’t always thought about them in the same ways. In Buying a Bride, Marcia A. Zug starts with the so-called “Tobacco Wives” of the Jamestown colony and moves all the way forward to today’s modern same-sex mail-order grooms to explore the advantages and disadvantages of mail-order marriage. It’s a history of deception, physical abuse, and failed unions. It’s also the story of how mail-order marriage can offer women surprising and empowering opportunities.

The Many Meanings of Diamonds

The volume highlights the important roles that memory, context, and circumstance also play in shaping how people interpret and then use objects in making personal worlds.

Images of diamonds appear everywhere in American culture, and everyone who has a diamond has a story to tell about it. Our stories about diamonds not only reveal what we do with these tiny stones, but also suggest how we create value, meaning, and identity through our interactions with material culture in general.

“Here’s the thing with kissing: it matters intensely or not at all.”

Mid-kiss, do you ever wonder who you are, who you’re kissing, where it’s leading? It can feel luscious, libidinal, friendly, but are we trying to make out something through our kissing? For Kathryn Bond Stockton, making out is a prism through which to look at the cultural and political forces of our world: race, economics, childhood, books, and movies. Making Out is Stockton’s memoir about a non-binary childhood before that idea existed in her world. We think about kissing as we accompany Stockton to the bedroom, to the closet, to the playground, to the movies, and to solitary moments with a book, the ultimate source of pleasure.

Arguments for the Uncoupled

A polemic account of this supremacy of the couple form, and how that supremacy blocks our understanding of the single.

Michael Cobb reads the figurative language surrounding singleness as it traverses an eclectic set of literary, cultural, philosophical, psychoanalytical, and popular culture objects from Plato, Virginia Woolf, and Morrissey to the Bible, Sex and the City, and Beyoncé’s “Single Ladies (Put a Ring On It).” Within these flights of fancy, poetry, fiction, strange moments in film and video, paintings made in the desert, bits of song, and memoirs of hiking in national parks, Cobb offers an inspired, eloquent rumination on the single, which is guaranteed to spark conversation and consideration.

Polyamory and the Future of Polyqueer Sexualities

“Beyond Monogamy is a book that should be read cover to cover if at all possible.”

Through an investigation of sexual interactions and relationship forms that include more than two people, from polyamory, to threesomes, to the complexity of the ‘down-low,’ Schippers explores the queer, feminist, and anti-racist potential of non-dyadic sex and relationships. A serious look at the intersections of society and sexuality, Beyond Monogamy takes the reader on a compelling and accessible journey through compulsory monogamy, polyamory, and polyqueer sex and relationships.

THE BOUNDARIES OF LOVE

Interracial Marriage and the Meaning of Race

How do people understand and navigate being married to a person of a different race? Based on individual interviews with forty-seven black-white couples in two large, multicultural cities—Los Angeles and Rio de Janeiro—Boundaries of Love explores how partners in these relationships ultimately reproduce, negotiate, and challenge the “us” versus “them” mentality of ethno-racial boundaries.

Osuji compares black-white couples in Brazil and the United States, the two most populous post–slavery societies in the Western hemisphere. These settings, she argues, reveal the impact of contemporary race mixture on racial hierarchies and racial ideologies, both old and new.

February eBook deals valid through February 28, 2022, only available through US retailers.